The Bolton era began with a 9-point loss to Richmond on a Thursday night at the MCG.

The Brendon Bolton era at Carlton almost got away to a perfect start in this opening match of the 2016 AFL season, when a revitalised Blues combination went down to Richmond by 9 points on Easter Thursday night at the MCG. Ahead by that same margin as the final quarter began, Bolton’s Boys were travelling like winners before the Tigers steadied, and their composure under pressure got them home. 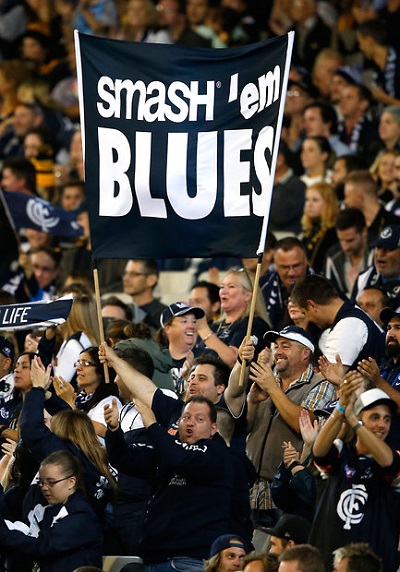 The Carlton side that ran out onto the ground to for this match – to the swelling roar of the 71,000-strong crowd – bore little resemblance to the line-up that had represented the club in the last round of 2015. On that occasion, Carlton finished off a truly awful season by going down by 57 points to eventual premiers Hawthorn. Ramifications had been swift and extensive, and no fewer than eleven players who took part in that match, namely Tom Bell, Andrew Carrazzo, Matthew Dick, David Ellard, Nick Holman, Troy Menzel, Clem Smith, Matthew Watson, Mark Whiley, Cameron Wood and Jason Tutt had either retired, been traded, delisted or overlooked when Carlton’s first team for 2016 was selected. Into the side for this game came captain Marc Murphy, Bryce Gibbs, Sam Docherty, Levi Casboult, Nick Graham and Simon White, joined by imports Jed Lamb, Matthew Wright, Andrew Phillips and Sam Kerridge, along with boom number 1 draft selection Jake Weitering. And in a twelfth and equally significant change, Brendon Bolton had succeeded John Barker as senior coach.

Although Carlton were rated as rank outsiders against a Richmond outfit considered as likely 2016 finalists, the Blues started well. The Tigers posted the first two goals of the game, before Zach Tuohy charged from half-back and kicked long to Jed Lamb inside the 50-metre arc. The former Sydney Swan slotted the shot, and the Blues were away. Some infuriating technical umpiring then marred a good quarter of football, highlighted by Matthew Kreuzer’s left-foot over the shoulder snap-shot for Carlton’s third major, and at quarter-time the Blues trailed by only three points.

Celebrating their return from injury, Marc Murphy and Bryce Gibbs were everywhere in the second term, aided by Pat Cripps and Ed Curnow, who took turns running with Richmond skipper Trent Cotchin, keeping him near kickless while winning plenty of the football themselves. In the ruck, Kreuzer and Andrew Phillips were being out-reached by former Blue Shaun Hampson, but they were far more effective around the ground. Richmond’s defence had tightened up and Carlton’s only goal for the quarter came from Andrejs Everitt, leaving the Blues eight points adrift at half-time and right in contention.
The third quarter began with a scintillating passage of play from Carlton, who swept ball forward from deep in defence with a chain of passes that ended with Cripps charging into an open goal. The game then broke open and both sides scored freely, including four goals in five minutes by the Blues. When Matthew Wright was awarded a free-kick and added his teams’ sixth for the term after 28 minutes of play, Carlton led by 9 points and the Tiger Army was beginning to abuse their own players.

Up to that point it had been a very even performance by the Blues, with winger Blaine Boekhorst’s composure and accurate disposal one of the many positives. Early in the final term, Boekhorst found Levi Casboult 30 metres from goal with a neat pass. Full points would have given his team real belief, but Levi sprayed the kick. Immediately, Richmond began to surge and Carlton couldn’t hold them. Inspired by three goal in the quarter from their lively small forward Sam Lloyd, the Tigers hit the front midway through the term and held on for a deserved, if somewhat lucky win.

Although beaten, there were plenty of positives for Carlton after this first hit-out under a new coach and a new game plan. The team played with a refreshing freedom - in stark contrast to the boundary-hugging caution of the past, and dared in pursuit of victory. There were no passengers, and the midfield engine room of Murphy, Gibbs, Cripps and Kreuzer was outstanding. Most significant for the future however, was the effort of 18 year-old Weitering, who looked right at home at this level, taking seven marks and racking up 17 disposals at 94% efficiency.

Debut (Coach) : Brendon Bolton
Debut : Jacob Weitering
Debut (Carlton) : Sam Kerridge, Jed Lamb, Andrew D Phillips, Matthew Wright
Interesting Fact : This was Carlton's 400th League game at the MCG, leaving the Blues with a 46.1% winning ratio from 192 victories, 5 draws and 203 defeats. In all Carlton had played 87 home games, 208 away games and 105 finals, winning 15 of our 16 Premierships at this ground.