Bryce Gibbs and Patrick Cripps inspired the Blues in an upset victory over Melbourne at the MCG.

At last – after an interminable 9-game losing streak, the Navy Blues shocked an in-form Melbourne, and won their seventh game of the season on this cold and wet Sunday afternoon at the MCG. With an enthusiastic home crowd urging them on, Carlton led at every change and defied the Demons to win by 20 points - shattering Melbourne’s slim finals aspirations, and giving Blues supporters a much-needed boost.

Only a fortnight beforehand, Melbourne had beaten reigning premiers Hawthorn at the MCG before accounting for Port Adelaide on the Adelaide Oval to climb to ninth spot on the ladder. Suddenly, the Demons were a chance of sneaking into the top 8, and they were not expected to have much trouble accounting for a struggling Carlton side on the verge of a tenth successive loss – especially when the Blues selectors made two late changes. Having already dropped Blaine Boekhorst for Liam Sumner, they withdrew Sam Kerridge and Jack Silvagni shortly before game time, and recalled Andrejs Everitt and Nick Graham. In front of a crowd of just under 41,000, Carlton’s stand-in skipper Kade Simpson won the toss and kicked with the aid of a slight breeze under threatening skies. 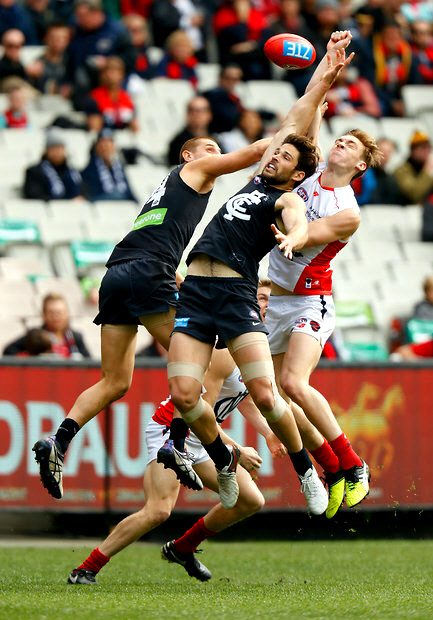 The Blues attacked the contest from the opening bounce, and within the first minute Bryce Gibbs set the standard with a clever pass to Dylan Buckley for the game’s first goal. Rain then began to fall, and players from both sides started losing their footing as trainers rushed up alternate footwear from the rooms. Carlton was intent on limiting the influence of Melbourne’s imposing ruckman Max Gawn, by double-teaming him with Matthew Kreuzer and Andrew Phillips, and relying on Gibbs, Patrick Cripps and Ed Curnow to win their share of clearances. Midway through the term, Buckley used his pace to kick his second major for the match, then three more missed opportunities limited Carlton’s lead to 15 points at quarter-time.

Cripps’ set-shot goal from the 50-metre arc, three minutes into the second quarter preceded a resolute quarter of football from the Blues, who chased and tackled relentlessly to set up a defensive wall across half-back. Gibbs, Cripps, Simpson, Sam Docherty and Matthew Kreuzer were outstanding in this term, and at the long break the Blues were ahead by an even three goals.

Heavy rain kept falling as the third quarter began, just as Nick Graham’s brilliant snap-shot goal from the middle of a pack was followed by Liam Jones’ spectacular mark of the day for another major. Melbourne replied with two of their own, before Buckley charged through the centre square and bombed his third from 55 metres to put the Blues 24 points up with a quarter left to play.

When Gawn marked and goaled in the first minute of the final term, Melbourne might have launched a revival - but Phillips immediately replied for the Blues and, with Simpson, Docherty and Zach Tuohy marshalling the backline, they held fast while the Demons squandered their last five shots on goal to be justifiably beaten by a well-coached Carlton side that had grown in confidence as the game unfolded.

Not for the first time this season, Gibbs, Cripps, Simpson and Docherty were the architects of victory for the Navy Blues, with valuable assistance from Kreuzer and Phillips. Gibbs’ first half, when he racked up 26 possessions, 6 clearances and five inside-50 entries was among the best of his career. Cripps finished the match with 30 disposals (19 contested) 12 clearances, 13 tackles and a goal, while Simpson and Docherty had 26 disposals each and 11 rebound-50s between them. Dylan Buckley’s three goals were decisive, and Liam Jones put in a pleasing all-round effort.

The only bad news for the Blues afterward was a season-ending medial ligament injury to Ed Curnow’s left knee, suffered during the last quarter. With a four-week recovery schedule, Curnow’s excellent 2016 season was prematurely ended, ahead of Carlton’s last match of the year against Essendon at the MCG on the following Saturday afternoon.

In : Liam Sumner
Out : Blaine Boekhorst

Losing Streaks : This was Carlton's first win since Round 11
Interesting Fact : Patrick Cripps scored the maximum number of votes (4x4)