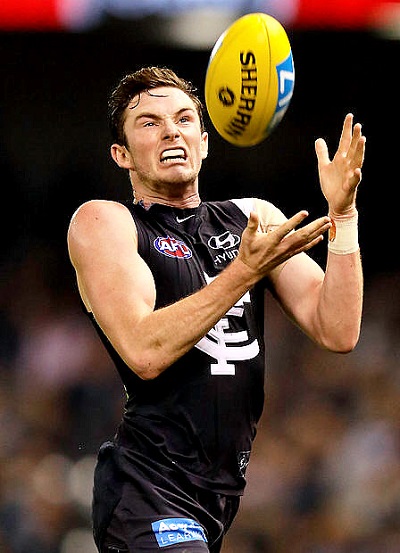 Former Sydney and GWS midfielder/forward Jed Lamb joined Carlton in September 2015 as part of a complicated trade deal involving four players and a raft of National Draft picks. The Blues gave up Geelong’s 2016 first round pick (received from the Cats for Lachie Henderson) plus selections 28, 77 and 95, in exchange for Lamb, Liam Sumner, Lachie Plowman, Andrew Phillips and pick No. 8 from GWS.

In joining his third club before his twenty-third birthday, Lamb achieved his aim of returning to his home state, and to his large, close-knit family of eight brothers and sisters. Back when Jed was just seven years old, his father had been murdered by a former friend, leaving his mother Kerrie to shoulder an immense burden. In spite of that awful tragedy however, Jed grew into an outstanding junior footballer for the Yarram Demons and the Gippsland Power, and in 2010 he was drafted by Sydney at selection 21 in the National Draft.

Although the broad range of talent and experience at the Swans prevented Lamb from playing senior football until round 6, 2013, by the end of that season he had racked up 12 games and won plenty of admirers. Quick and clever, he was effective through the midfield and dangerous around the goals – then the arrival of former Hawthorn champion Lance Franklin changed the landscape of Sydney football forever. To fit Franklin in under the salary cap, cuts had to be made, but Lamb couldn’t accept Sydney’s offer of a new deal. He decided to move on, and registered for the 2014 Pre-Season Draft.

Meanwhile, across town, GWS were well aware of Jed’s qualities, and they backed their judgement by snapping him up with their number 1 pick. In his role as List Manager at GWS, former Carlton champion Stephen Silvagni had assembled a team that was young, enthusiastic and packed with talent – and it was precisely the depth of the Giants’ midfield that stood in Lamb’s way. He played eight matches for his new club in 2014, before his opportunities dried up and he added only two more games in 2015. His form wasn’t poor - he played some brilliant football for the Giants’ Reserves and was selected in the 2015 NEAFL Team of the Year – but with the likes of Rhys Palmer, Will Hoskin-Elliott and Devon Smith ahead of him in the pecking order, a regular place in the senior side was never guaranteed.

At the end of that year, Stephen Silvagni returned to Princes Park armed with a list of GWS players he believed were not getting the opportunities they deserved. The shell-shocked Blues had just experienced one of their most traumatic seasons, but throughout the club there was a steely determination to put things right. The trade involving Lamb and the three other young Giants was one positive step, and their progress was to prove crucial to Carlton’s resurrection.

After accepting Carlton’s number 13 guernsey - left behind by Chris Yarran after his defection to Richmond – Jed made his debut at half-forward the Blues against the Tigers at the MCG in the opening round of the 2016 season. Thirteen disposals and a goal was an honest effort first up, and Lamb went on to kick 13 goals in 15 games for the year. Only 6 of those matches brought victory to Carlton however.

Lamb's 2018 was his best in terms of games played, with 18 games for the year across a range of roles. As our defence fell apart due to injury, Lamb was thrown back to the last line and held his head high. However it was not enough for Lamb to be recontracted for 2019 and his career finished up after 66 AFL games, 2/3 of which were in Navy Blue.

The Nicholls brothers - Don and John.jpg