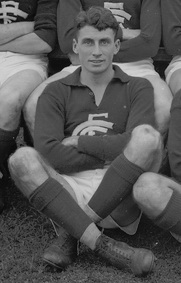 Born in Camperdown and recruited from Melton in Melbourne’s outer north-west, Herbert Vivian Butler was a persistent and loyal rover who played just 25 games in a decade at Princes Park from 1935 to 1944. Despite never quite establishing himself as a regular senior player, he was often a star at Reserves level, and was voted Best and Fairest for the seconds in his final season.

Wearing guernsey number 29, Butler made his senior debut for the Blues as 19th man against Hawthorn at Princes Park in round 13, 1935. Carlton demolished the Mayblooms by 66 points that afternoon, with ‘Soapy’ Vallence kicking seven goals. Butler was given just a brief run late in the match, only to be omitted for the following week. He waited almost a year for another opportunity, and it seemed that his career was about to take off when he was selected for a number of consecutive games late in 1936. He kicked his first career goal in round 15 against Richmond, but was left out again prior to Carlton’s defeat by Melbourne in a hard-fought Semi Final.

By June 1938, Butler had made less than a dozen senior appearances before The Argus newspaper awarded him three votes as best on ground in the round 10 match against South Melbourne at the Lakeside Oval. Bert kicked three goals that afternoon, and the Argus praised him by reporting, "For Carlton, Butler played a sterling game, his kicking and marking making him outstanding."

Three weeks later, Richmond enforcer Jack Dyer crashed through Butler and shattered his collarbone during a typically physical encounter at Punt Road. That injury finished Butler’s season (and perhaps his career) prematurely, because he could only watch on as the Blues swept to victory over Collingwood in the 1938 Grand Final.

In 1939, Australia was drawn into World War II and an era of great loss and deprivation began. Throughout those awful years, Butler continued to serve the club as required, and his Reserves Best and Fairest award in 1944 was richly deserved.

"School teachers' transfers and promotions for 1945 have had early notification this year.
Changes will involve Bacchus Marsh in the loss of Mr. Monty Brown, who has been promoted to Echuca Technical School.
Mr. Bert Butler, well known locally for his prowess at football and tennis, will be the new teacher at Bacchus Marsh H. E. S."
(Express Mellton Nov 25 p2)
Is this Carlton's Bert Butler whose last game for the Blues was in 1944?