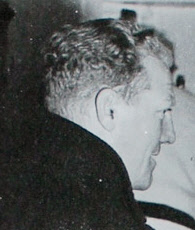 A wonderfully consistent and courageous footballer who led by example, and captained three of the game’s iconic clubs during his career, Robert Charles ‘Bomber’ Atkinson appeared in 44 games for the Navy Blues over three seasons from 1942 to 1944. During the last of those years, he was appointed captain of the Carlton Football Club, when Jim Francis wrecked a knee and was ultimately forced to retire.

Born in 1913, Atkinson represented South Camberwell throughout his teenage years, and was recruited by VFA heavyweights Coburg in 1935. Over the following six seasons with the Lions, he built a reputation as a fierce, but strictly fair competitor, and one of the hardest defenders in the competition to get kick against. He was Coburg’s captain in 1941 when the Lions lost the VFA Grand Final to Port Melbourne in front of a crowd of 36,000 at the MCG, only for the VFA to then be forced into recess because of World War II. As a consequence, Bob and two of his team-mates; Lance Collins and Ivor Brown, were released to Carlton.

Atkinson was 28 years, 199 days old and wearing Carlton’s number 9 guernsey when he was selected as 19th man for his first league match for his new side, against South Melbourne in round 2, 1942 at Princes Park. In an anti-climactic beginning however, he spent the entire game on the bench, as the Blues were walloped by almost six goals.

Eventually, his career got underway properly a fortnight later, when Bob was named in a back pocket in the starting line-up, and the Blues beat Fitzroy by 23 points. Over the next two seasons Atkinson and ex-Geelong star George ‘Fibby’ Gniel formed a daunting last line for the Blues, until the partnership was ended by Gniel’s return to the Cats when they rejoined the VFL in 1944.

Throughout his three seasons with Carlton, Bomber missed only four games through injury – including the 1943 first Semi Final, which the Blues comprehensively lost to Fitzroy. He was awarded Carlton’s 1943 Most Consistent Player award, and served in the St. John’s Ambulance brigade in central Melbourne throughout the war. Playing all of his football deep in defence, he rarely ventured forward, and therefore didn't trouble the scorers in his time at the Blues.

In 1944, Bob was appointed acting captain of Carlton in the absence of Jim Francis, who had suffered a serious knee injury and was in grave doubt of ever making it back on the field. Sure enough, six matches into the season, Francis retired, leaving Atkinson to lead the Blues for the rest of the year. History buffs are aware that Atkinson was the only man to captain the great Ern Henfry during his career at Princes Park – a situation that came about when the brilliant young West Australian played the last two games of 1944 on wartime permits while serving in the RAAF, and Bomber was his captain on both occasions. Two years later, Henfry returned to Princes Park, and himself captained Carlton’s 1947 Premiership team.

The VFA resumed its competition in 1945, so Carlton farewelled Atkinson with real appreciation when he was obliged to return to the Lions’ captaincy – and what a year they had! First, Bob led them through the VFA home and away season undefeated, to finish three wins clear on top of the ladder. Their percentage was 184.9% (averaging 125 points per game) with an average winning margin of 57 points. Then it all went horribly pear-shaped.

First, Coburg lost to Williamstown in the second Semi Final by 17 points, despite having 31 scoring shots to 28. The final scores were 8.23 (71) to 12.10 (88). Then in the Preliminary Final one week later, they fell to Port Melbourne at the Junction Oval by two points; 13.11 (89) to 13.13 (91). Coburg had been bundled out of Premiership contention in straight sets, and Williamstown went on to win the Association flag by 37 points over Port Melbourne. Meanwhile, Carlton were defeating South Melbourne by 28 points in the infamous 'Bloodbath' VFL Grand Final at Princes Park. It is fascinating to imagine Bomber’s thoughts at that time.

Atkinson apparently retired for good following the 1946 VFA season, but not long afterward was talked into pulling his boots on for just one more year with strugglers Northcote, who were in dire need of on-field leadership. Bob accepted the vice-captaincy to start with, but when captain Norm Dickson was injured mid-year, suddenly found himself leading his third club in a similar situation to what had occurred at Carlton. Despite his best efforts, the Brickfielders won only four games for the year, and Atkinson’s last season as captain produced his first wooden spoon. Still, that scarcely mattered in the overall scheme of things, especially years later when Bomber was honoured by being named in a back pocket in Coburg’s Team of the Century.

The 28th captain of the Carlton Football Club, ‘Bomber’ Atkinson passed away peacefully on Christmas Day, 2006, at the age of 93.

1990 - Stephen Silvagni at the Brownlow Count.