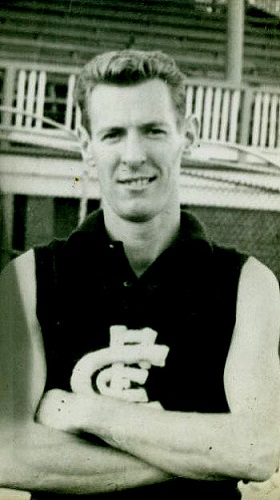 Recruited from bayside Mentone, Robert Bromley “Bob” Crowe was a wiry, versatile all-rounder who goaled with his first kick in senior football, and later, played in the Blues’ 1962 Grand Final loss to Essendon. He wore three different guernsey numbers in his career, and played his first, his last, and his 100th game against Fitzroy, in a career that spanned almost exactly ten years.

Bob wore guernsey number 27 in his senior debut as Carlton’s 20th man against the Roys at Princes Park in round 17, 1954. The Blues’ star full-forward "Nobby" O’Brien kicked ten goals in a big win that afternoon, but Bob also etched his name into the history books too, when he came on late and snapped a major at his very first opportunity. However, despite that illustrious start, he found it difficult to hold his place thereafter, and made just 20 appearances in his first three seasons. He changed to guernsey number 34 for 1955-56, but it was only when he switched to guernsey number 14 in 1957 - and embraced Blues’ captain Ken Hands’ advice to back his ability and play as an attacking half-back flanker - that he became a regular member of the team.

In 1959, Bob was involved in an unusual incident prior to another match against Fitzroy – this time at the Brunswick St. Oval in round 10. He was on his way down the player’s race to the field that day, when he slipped and fell, injuring his right knee. When the field umpire was informed, he made the correct decision to allow the Blues to substitute another player – because Crowe’s injury had happened before the game had officially started (refer to extract below).

Carlton made the finals on just three occasions in Bob’s career - in 1957, 1959 and 1962 - the latter being his best and most consistent season. In July 1962 he was selected in the Victorian representative squad that played South Australia, before celebrating his 100th game in Carlton’s controversial Semi Final victory over Melbourne. September saw the Blues progress to their first Grand Final for thirteen years - with Crowe in his regular half-back position alongside Wes Lofts and Graeme Anderson - but Essendon proved too good and won by 32 points.

Bob went on to play another two seasons after that, and finished on a high when Carlton again demolished Fitzroy in the last round of 1964. By then still only 28, he still had plenty of good football left in him when he retired from VFL football to join VFA Club Dandenong.

Race Crash Ruling
Carlton began the day virtually one man short when Bob Crowe stumbled while running down the race and injured his knee before reaching the playing field. He did not recover, limping with obvious pain whenever the ball came his way during the game, and failing to keep up with play. Carlton appealed to the umpire, and were allowed to substitute one of their reserves halfway through the first term, although technically Crowe's mishap had taken place off the field. - 100 Years of Australian Rules Football.

In Carlton's final practice match of 1960 Bob played at full forward and kicked 9.7 in the first half before heavy rain set in and made ball handling difficult. Previously Bob had been tried in that position but managed only behinds as his drop kicking was problematic. Bob said his improvement in accuracy was because he now used the flat punt and coach Ken Hands said he was off balance with his kicking action.
However, next week in round one would see Bob playing on the back line at centre-half back.