Carlton lost to Essendon by 7 points at the MCG 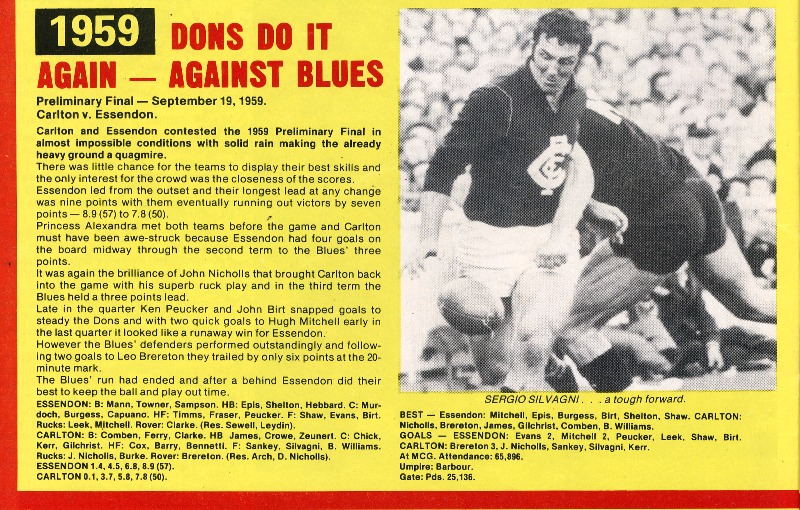 Like the week before, the game was played in wet conditions, and Essendon managed to establish a slender lead at the first break, after kicking the games only goal to that point. Halfway through the second quarter Essendon had opened up what looked to be a match winning lead, having kicked the only 4 goals in the game and opened up a 25 point lead.

John Nicholls helped the Blues get back in the game from the ruck at that point, and Carlton kicked the next four goals which helped the Blues to a 3 point lead in the third quarter. Essendon kicked two goals to one to finish the quarter, and when they kicked the next two goals early in the last term, the game looked over. The Carlton defence played magnificently for the remainder of the game, and Essendon was held goalless. The Blues kicked two goals at the 20 minute mark of the last quarter through Brereton to close within 6 points. Essendon closed the game down from then on and managed to run out 7 point winners. 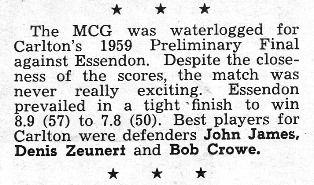 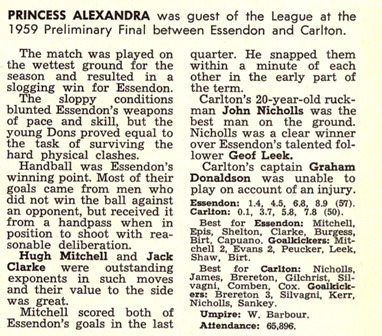 Last Game: Kevin Clarke and Laurie Kerr
Score Records: This loss marked the end of 5 consecutive finals losses from 1949. With us not playing finals in 1960-1961, the finals drought was indeed long-term.

2007 - Koutoufides and Christou at RMIT