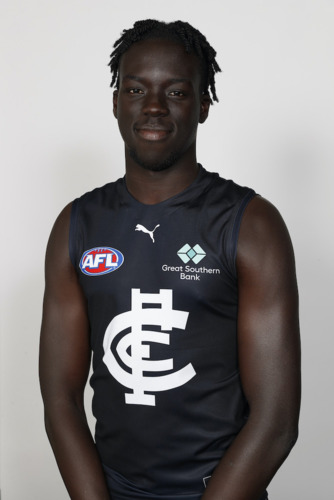 19-year-old Northern Knights prospect Dominic Akuei is one who developed quickly in 2021, capturing attention with his enormous vertical leap as he was made to transition from a key position bookend to a makeshift ruck on the fly. Nominated as a Carlton NGA candidate, he could garner interest towards the back-end of the draft, but would be a handy and developable rookie option. Upside is a buzzword attached to players like Akuei, with his athletic profile promising for a player of his mould. He is capable of jumping on the heads of opposition rucks, but uses his aerial aptitude to time spoils well in his defensive duties. Able to also play up forward, Akuei is versatile and has solid potential, but has plenty of improvement left.

Akuei will join Carlton as a category B rookie for its 2022 season. Akuei is the first ever recruit from the Carlton academy. On the club’s website, it said Akuei was a defender “first and foremost” and capable of pinch-hitting in the ruck, using his vertical leap skills. In the post, head of list management Nick Austin said the acquisition of the young player was an endorsement of the Carlton Academy, the Knights’, and Akuei himself. “To be able to officially welcome Dom to our ranks is a significant moment for our football club, as our first recruit coming from our next generation academy,” Austin said. “Dom is someone who has come on in leaps and bounds in recent seasons and he’s obviously someone we’ve been keeping our eye on for a while. “He’s got great judgment in the air, he reads the play well and he can play multiple roles, particularly down back but also in the ruck if the situation presents. “We’re delighted that we can give Dom the opportunity at our football club.”

Dom Akuei was recruited from St Mary's via Old Trinity to the Northern Knights.