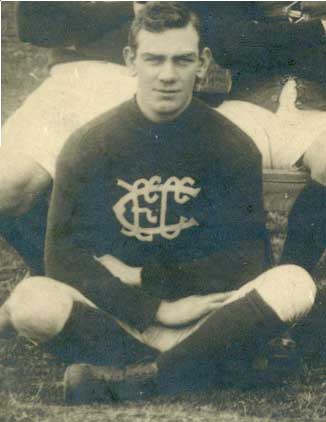 A brilliant, elusive, three-time Premiership rover for Carlton in the first decade of the 20th Century, Alex “Bongo” Lang was at the centre of a match-fixing scandal during the 1910 final series, and suspended for five years at the peak of his career.

A local lad born in Carlton, Lang was playing brilliant football with Parkville Presbyterians when he was recruited by Carlton's manager/coach Jack Worrall in 1905, and quickly established himself in a star-studded Carlton team. With champions on every line, the Blues swept to consecutive VFL Premierships in 1906, ’07 and ’08. In 1909 The Australasian newspaper named Lang as the outstanding player of the competition.

Then, in September 1910 - just before Carlton was to meet South Melbourne in the second semi-final – the Carlton committee withdrew three players; Doug Gillespie, Lang, and Doug Fraser, from the team. No reasons were given publicly, but it was common knowledge that the club had received credible information that all three had been bribed to play poorly against the Bloods.

The VFL and Carlton launched separate investigations, and a drastically weakened Blues team went down to South by 12 points. However Carlton, as minor premiers, had earned automatic entry into the Grand Final. Their opponent would be Collingwood, who defeated South Melbourne in the preliminary final. In the lead-up to the decider, Doug Gillespie was exonerated by both enquiries, but Fraser and Lang were found guilty and suspended for five years. Gillespie returned to the Carlton team for the Grand Final only to suffer defeat by 14 points. For more on this scandal, click here.

Thereafter, Lang consistently denied that he was guilty of planning to play dead against South Melbourne. He conceded that an offer had been made to him, but always maintained that he had no intention of accepting it, because of his loyalty to the Blues. His words had a ring of truth to them. After serving his long suspension, Bongo returned to Princes Park to play again in 1916 and '17. He was a good contributor throughout, and one of our best in the 1916 Grand Final loss to Fitzroy.

Friday's Herald (July 01 p2) reported that Alex 'Bongo' Lang was working in the roof space at the Sunbury Ayslum on Wednesday installing electric lighting. He looked down through the manhole and saw a patient nearing a hammer he had left on the floor.
As he leaned out warn the inmate, Lang over balanced and fell15 feet (4.5m) to the floor! Despite this, he was named amongst Carlton's better players in the Round 10, 1910 match.