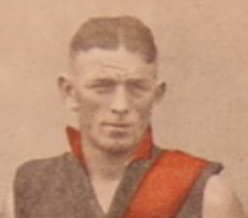 Frank Walshe was born in Carlton, and was a strong, one-pace follower who was a fine contributor in successive VFA Premiership teams for Coburg in 1927 and ’28. The following year he joined Footscray, and went on to represent the Tricolours in 25 senior matches. At the end of the 1931 season, he parted company with Footscray and found his way to Princes Park, where he managed one last VFL game - in round 2, 1932 - for the Blues against South Melbourne.

Many swansong matches are memorable for the wrong reasons. However, Walshe’s solitary outing for Carlton on that sunny afternoon at Princes Park was notable for a spectacular exhibition from two of the all-time great full-forwards. Harry Vallence kicked six goals in a scintillating display for the Blues, while at the other end of the ground, the Bloods’ mercurial Bob Pratt booted seven. South’s clever half-forward Peter Reville also chimed in with five majors, as they thrashed Carlton by 38 points.

Walshe partnered Charlie Davey and Jim Crowe in the first ruck for Carlton, leading a team that included two other first-game players in Ralph Green and Jim Williamson. South kicked seven goals to two in the first quarter, and from then on were never troubled. On the following Thursday, Walshe and Williamson were both omitted for the next game, and so joined the list of Blues who played their first and last games on the same day.

Almost eight years after that one appearance for the Old Dark Navy Blues, Walshe enlisted for service with the Australian Army in World War II. During his four years in uniform, he rose through the ranks to Warrant Officer Class 2. He was discharged in June 1945, and settled back into civilian life at Ferntree Gully with his wife Ethel. Aged just 57, Frank passed away in 1962.

Walshe was originally recruited from the Gippsland town of Trafalgar.

Frank Walshe transferred to the League Sub - District club Fairfield during the 1932 season. In 1934 he won the Glanfield Memorial Cup and was runner-up in the Colta Medal.