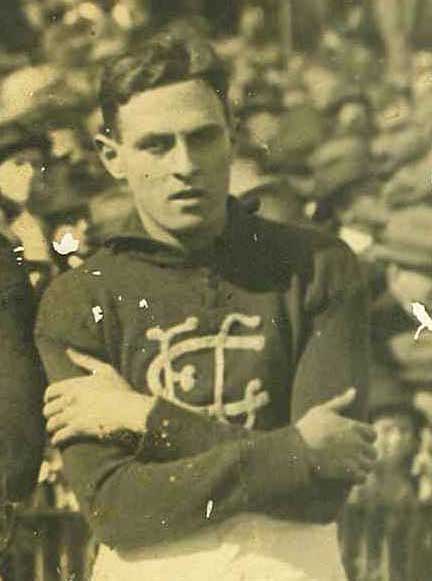 Harold Leo Credlin (who appears under either of his given names in VFL records) made an impressive start to his VFL career with Carlton when he kicked five goals on debut against South Melbourne at Princes Park in round 14, 1922. Playing at full-forward and combining well with his centre half-forward and captain Horrie Clover, the agile 19 year-old from Inglewood in central Victoria seemed a real find for the Blues – especially when he landed another five majors as Carlton impressively beat Geelong at Corio Oval in round 16.

But from then on, Harry’s career went into a long, slow decline. Although he found himself playing finals football in just his fifth senior game – against Essendon in the 1922 first Semi Final – he didn’t trouble the scorers, and the Same Old came out on top by 5 points. Credlin remained at Princes Park for another three seasons after that, but couldn’t adapt his game to any position other than full-forward, and his last 11 matches produced only six goals.

His final outing in guernsey number 9 for Carlton came in a typically tough contest against Collingwood at Victoria Park in round 8, 1925. The Blues trailed all day before eventually losing by 14 points, and Credlin was one of three members of the team who chose to move on afterwards. The others were Carlton’s former captain and two-time Premiership star Paddy O'Brien – who crossed town to play with Footscray – and solid ex-Tasmanian Aub Charleston, who opted to continue his career at Essendon.

Five years later, Credlin made a surprise comeback to the game at full-forward for North Melbourne, playing against Geelong at Corio Oval in the opening round of 1930. The struggling Shinboners kicked their only two goals of that game in the first quarter, then were simply destroyed by the home side to the tune of 102 points. Harry Credlin was one of those omitted from North’s team for round 2, and never played again at elite level.

Like many of his contemporaries, Harold had a vocation outside of football. Harold first studied to be a surveyor and then a civil engineer while chasing leather at Princes Park. After football Harold returned to Inglewood to work for State Rivers and Water Supply Commission going on to become chief engineer of the Bendigo district and then on to become Chief Executive Engineer of the State Rivers - equivalent of CEO.