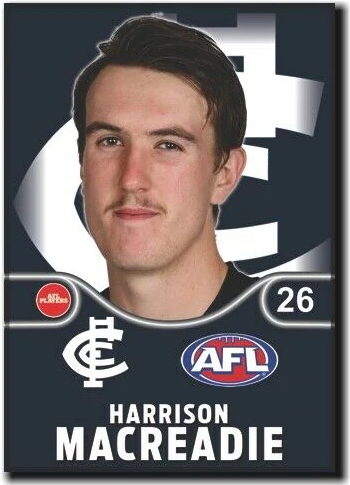 
For almost twelve months prior to the 2016 AFL Draft, it seemed inevitable that promising 196 cm running defender Harrison Macreadie would be joining GWS, particularly after the Giants relocated him from his home town of Henty in southern NSW to Sydney, and included him in their junior academy.

At the draft call however, Carlton surprised by offering number 47 for Macreadie, and GWS opted not to match the bid. As a life-long Carlton supporter, Harrison was overjoyed to be heading for Princes Park, especially after not being aware of Carlton’s interest in him. “There was little talk with Carlton, so I had no idea. It was a real shock," he said.

After representing the NSW-ACT Rams in the Under-18 National Championships in 2015, Macreadie had been short-listed for the All Australian team, but did not make the final cut. In 2016, he played nine matches for the Giants' NEAFL side (including their thrilling 4-point Grand Final victory over Sydney Reserves) before an ill-timed thigh injury prevented his participation in the AFL draft camp. That could have been a blow to Harrison’s prospects, but Carlton was obviously not deterred from targeting him, and in early December he was allocated the Blues’ guernsey number 26.

A solid 8 games in his debut season was a great start for the slightly built youngster, with his sure hands and good pace noted. Unfortunately his 2018 was ruined by injury and he was not able to get out on the park for the seniors notwithstanding the injuries to our defence. Only 1 more game in the next 2 years would follow owing to injury but also the form of Weitering and Jones.

Carlton informed a further four players in late November that they will not be offered new contracts in 2021. Harrison Macreadie, Callum Moore, Fraser Phillips and Cameron Polson were today told that their playing contracts will not be renewed, joining fellow delisted players Hugh Goddard, Darcy Lang, Finbar O’Dwyer and Ben Silvagni. For 2021 he signed up with Williamstown FC in the new eastern states lower league with former ex blue Cameron Polson. He would join his cousins Nick and Sam Murray at Williamstown.

Former Swan and Magpie Sam Murray is a cousin on Harrison Macreadie, another cousin Nick Murray played in the NEAFL for the GWS Giants.