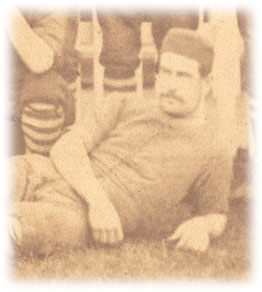 Most sensational Carlton player of the year, however, was an 1879 recruit, Harry Wilson, who came from East StKilda.

Wilson, who was a polished player, was chaired off the ground in triumph at the end of games against Geelong and Melbourne.

He was a follower, and was described by 'The Footballer' as one of the surprises of the season.

A few years later Wilson became a most competent umpire.

1880. Carlton vs Geelong, East Melbourne ground.
Harry Wilson played such a towering game that he was carried off the ground shoulder high.

Harry Wilson, who made a sensational rise in 1880, was the star of 1881.
It was said he had all the qualifications that make a brilliant footballer, and one critic wrote of him:

"Wilson has been the theme of general admiration, and services rendered by him have been remarkable."

1880. Interstate representative and one of the best Carlton men of the year.
Suddenly jumped to the front and became regarded as the best player for the year.
Twice carried from the ground shoulder high.

1881 I suppose it will readily conceded that the most prominent figure on the football field throughout the past season was Harry Wilson of Carlton. The embodiment of what a follower should be, always on the ball, and quick to get it and use it, his performances during the season have placed him in the very first rank of Victorian followers, while his proficiency as a goal-kicker is proved by the very respectable number of 10, secured for his club.
(Australasian October 15 1881)

1881 Possesses all the qualifications to make a sterling and brilliant footballer, during the season he has been without doubt the theme of general admiration on the football field; the services rendered by him as a follower have been remarkable as they have been wonderful.
(The Footballer 1881 p24)

1882 A great follower, one of the best players for the season.

1883 A leading player for the year.
(Centenary Souvenir of Carlton Football Club p16)

1883 Was suspended for 10 matches after a rough game against Essendon on July 21 along with his team mate Bill Moloney who copped 3 weeks.

The Essendon player Hughes was also found guilty but was not penalised.

1884 H. Wilson was presented with an illuminated address for services to the club, at the Carlton general meeting held Friday 4th. April.

1886 The Victorian team includes a player A. Wilson, although there was an A. Wilson at the time at Carlton could this have been a misprint?

1923 July 6 (p4)
"Old Boy" of The Argus wrote about the best players to have played and mentions Harry Wilson among the Carlton champions of the early 1880's.

1923 October 27
Jack Worrall writing for The Australasian (p26) about his 'Forty Years Of Football' says of Harry Willson;
"An absolute champion follower in Harry Wilson, of Carlton, who was just finishing his career when mine was commencing, one never hears extolled. He was a wonderful mark and player, and was the dark blue champion after Coulthard."