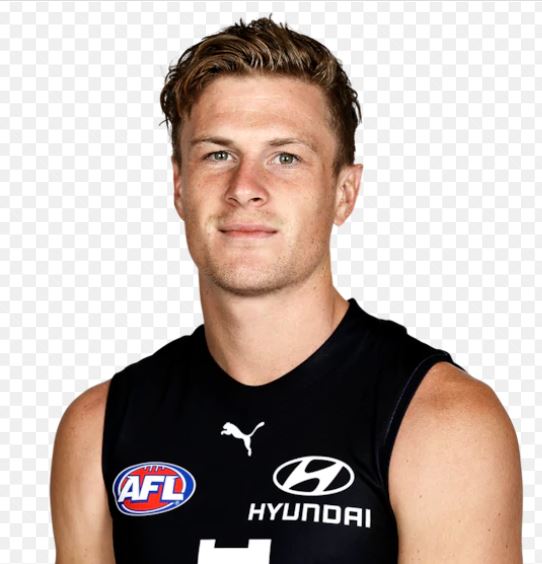 Renowned for his elite endurance, Newnes was selected by St Kilda with pick No. 37 in the 2011 National Draft from the Northern Knights with his original junior club being Ivanhoe. After eight years at the St Kilda, Newnes had the option as a free agent to move to another club in which he was subsequently signed by Carlton. Newnes arrived at Ikon Park via Moorabbin after over 150 games at the elite level. A natural leader who can run all day, Newnes is best suited across a wing and has shown for St Kilda his ability to have an impact in the attacking and defending phases of the game. The midfield workhorse has proven himself at AFL level with his longevity a feature, playing 123 consecutive games for the Saints in a stretch from 2013-2019. Originally from the Northern Knights, Newnes knows his new club well: his grandparents lived on Amess Street, a torpedo punt away from Royal Parade.

Blue heavens: Newnes rescues Carlton from defeat after final siren (Anthony Colangelo - The Age.)
Jack Newnes kicked an after-the-siren goal from close to the 50-metre line, from beyond the boundary, to hand Carlton an incredible victory over Fremantle. The goal sparked delirium for the Blues players on the field after they ground their way back into the game in the second half against the Dockers, who defended in a grim and disciplined manner all evening. Newnes won the ball courtesy of a down field free kick thanks to Andrew Brayshaw, whose momentum when jumping for a smother bumped Sam Docherty to the ground after he tried to kick a ball into Carlton's forward 50 from the wing. Docherty had kicked the ball out on the full and if the free kick wasn't paid Fremantle would likely have won. Moments earlier, Harry McKay and Liam Jones missed difficult set shots from the boundary with under two minutes and one minute to play in the game, respectively, to put the Blues in front. Before Newnes' stunning goal there had only been four behinds scored in the final term, two to each team, in a desperate and willing end to the contest. The Blues were staring down the barrel of three consecutive losses courtesy of a Dockers side on the rise; a disciplined unit in defence and not dissimilar to the Blues in attack using a swag of small forwards to buzz at the feet of their big targets. Carlton led for two minutes in the game, taking the lead early in the first term then again after the siren. Patrick Cripps, Sam Walsh and Ed Curnow led Carlton's push in the third term from the midfield given they trailed by two goals at half-time. Nat Fyfe moved into the middle more in the final term to blunt this impact but the Blues kept pushing and got their reward as late as they possibly could. Fremantle could only kick one goal in the second half to Carlton's three and will rue chances they had early in the last quarter to take the four points. Winning this match was crucial given the Blues play Collingwood, GWS and Gold Coast in the next three weeks, who are all teams that will be gunning for one of the spots in the bottom half of the top eight on current form. One problem the Blues had early, which coach David Teague spoke about on the television coverage at half-time, was committing too many men to the contest and then getting beaten on the spread outside. They improved at this in the third term and began to run through the Dockers' zone but their kicking inside 50 remained a problem, granted the conditions were slippery. While he's not kicked huge bags like Tom Hawkins or Josh Kennedy this year, Matt Taberner continued to be one of the best key forwards in the competition with his haul against the Blues. Taberner did it against Jacob Weitering too, the Blue probably beaten for the first time in 2020. Along with Rory Lobb the duo remain underrated, even though they're among the most powerful contested marking pair in the league. The Blues win was one of their best, if not their best, in recent years and renews their push for a finals spot. They didn't play their best football in the first half but crucially they made sure they did not get blown out of the water, and remained within striking distance all game. This after-the-siren victory will make up for their post-siren loss against Port Adelaide earlier in the season.

Trivia: After the Round 13, 2020 game in Darwin, Newnes became the first VFL/AFL player to player senior football in all 8 states and territories of Australia as well as New Zealand and China.