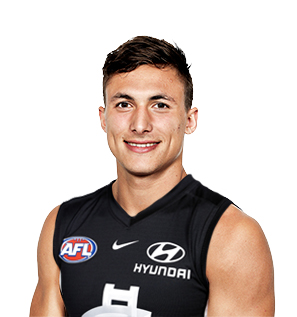 Carlton selected Josh Deluca with its pick in the 2019 NAB AFL Mid-Season Rookie Draft. Considered a premier midfielder in the WAFL, Deluca is a hard-nosed ball-winner with a competitive edge who thrives on contested football. He also has great speed on the outside to complement his inside work. In a state game earlier this year playing for the WAFL against SANFL, Deluca took home the Simpson Medal as best-on-ground: he racked up 29 disposals, laid seven tackles and kicked a goal to show his class. Deluca spent three seasons at Fremantle between 2015 and 2017, playing four games for the Dockers after being selected with pick No.68 in the 2014 National Draft.

A four-time WAFL Premiership player, Deluca won his first flag with Subiaco in 2014 before adding to his tally with Fremantle affiliate Peel Thunder in 2016 and 2017. Deluca returned to Subiaco last season, winning his fourth premiership overall. The 23-year-old has averaged nearly 26 disposals a game this season for Subiaco, whilst also studying and working in the project and commercial management industry. Deluca would be given guernsey No.47 and wore number 39 at the Dockers.

Shortly after arriving, Deluca was selected for his Blue debut and managed 6 games in 2019.

At season's end, Deluca would be delisted but would train in the pre-season in the hope of being picked. What transpired at the Club in assessment of those 6 games can only be wondered, but Deluca would not be redrafted so after circa 6 months at the Club - a rehabilitation, 6 games (albeit up forward) and some pre-season training - Deluca left the Blues. Deluca would continue his pursuit to play at AFL level by lining up with VFL Club the Box Hill Hawks for the 2020 season.

He played his junior football under the name of Josh Deluca-Cardillo.