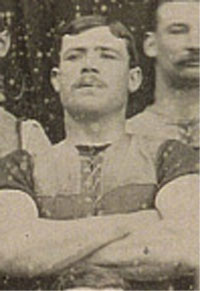 Victorian Football Association
Career: 1888-89
There is some confusion as to which McInerney played in each game as there were three players named McInerney playing for the Blues around this time.
This occurs often in Carlton matches Pre VFL as there were the Robertsons, Coulsons, Stricklands, Hillsdens, Waltons to name a few, brothers, relations, or same named players to play.
Most football previews and reports only mention the player's surname.
However, The Australasian in it's report of the Carlton - Norwood match played on the M.C.G. 19 May 1888, says M. McInerney made his debut for the Blues after crossing from North Melbourne.
The report said he tried hard, but he did not play as well as expected.

1891
Zeehan & Dundas Herald, February 02 (p3) ;
"Mick McInerney, who is well known in Tasmania by visiting us with the Hotham and Carlton Football teams, will meet "Starlight" at the Apollo Hall, Melbourne in an eight round set-to on February 9,"