According to The Footballer 1876 (p27) J. Petherick was captain of the Comet, formed in 1875, their colours were scarlett and white stripes and played in Royal Park.

1876 July 22
Petherick was named as one of Carlton's best players for the Reserves or Second Twenty in their 1-0 win over Carlton Imperial at Royal Park.
(The Argus)

1876 The Footballer 1876 edition mentions Petherick as a good player for Carlton's Second Twenty this year.

1877 June 30
Carlton played Williamstown on the Madeline Street ground Carlton.
Senior players were delayed in returning to Melbourne from Sydney
A combined team of senior and reserves players were called upon to play Williamstown.
Petherick was named in the Carlton squad of 25.
Carlton won 2 - 0

1878 May 24 Friday Queen's Birthday
Petherick named in the Senior Twenty that played the Sale F.C. at Sale.

1878 August 03
Petherick was named in the Second Twenty squad that played Adelphians in Royal Park.

1878 September 13
Julius E. Petherick aged about 23, boarded the S.S.Lusitania sailing from Melbourne to London via Adelaide.
Was he travelling to Adelaide, or London?

1879 November 10
J. E. Petherick was a competitor in the Playing Members Handicap races at the Carlton Sports Day.

1883 June 20
Julius married Thirza Smith at Kooringa S.A. (Burra Record June 29)
Petherick stood for local council elections in 1883 as the member for South Ward, he was defeated.
Julius was a watchmaker/jeweller and had a shop in Kooringa, Burra.
Kooringa was a company owned mining town, it is now known as Burra South.

Julius' signature on an 1878 petition presented to the Melbourne City Council calling for the establishment of a dedicated Carlton Football Ground.
Public Records Office Victoria 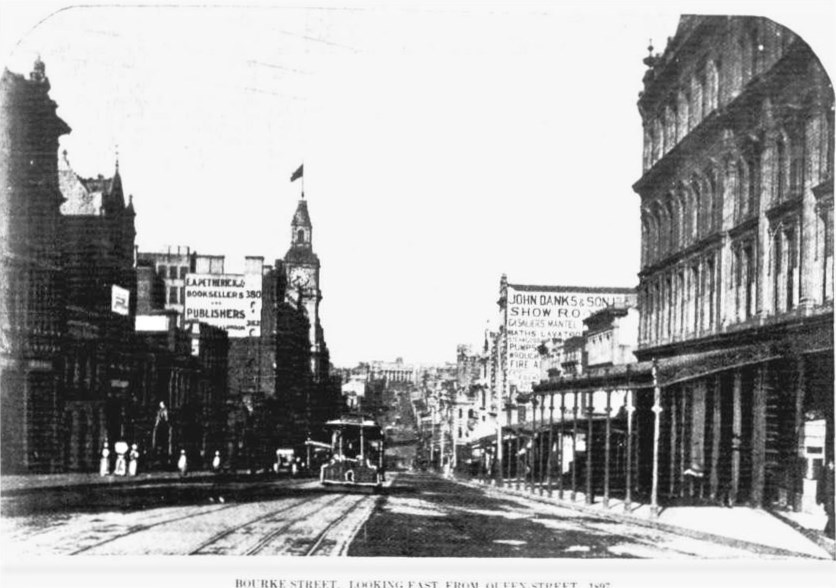 There are two Carlton connections with this 1897 photograph of Bourke Street looking toward Parliament.
First, John Danks & Son hardware was Carlton champion Harry Guy's life long employer where he rose from office boy to head Danks' Sydney operations.
The site is probably where McEwans hardware store later stood.
Second, directly across the road is E. A. Petherick booksellers (with the Melbourne G.P.O. clock tower on left and an on-coming cable tram).
Edward Augustus Petherick founder of the book store was the older brother of Carlton's Julius Evan Petherick..
It seems that there were no parking problems 120 years ago.