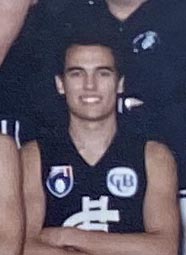 Matheu Quirk is the son of Bryan Quirk, and was recruited from Oakleigh in the VFA and Berwick. He was a member of Carlton's Bert Deacon Squad in 1988 along with fellow sons of other Carlton Premiership players in Chris Mulcair (Barry) and Jason Gill (Barry). Matheu Quirk also played in both of the Carlton Under 19s 1990 final series games in number 33 and played another 16 games for 7 goals in Carlton’s Under 19s during 1991 with his number being 32 (his father's number). He played 6 reserve games for 2 goals in the second half of 1990 in number 38 and played another 6 games for 1 goal in 1992 in number 53 for a total of 12 reserve games and 3 goals.

Matheu Quirk debuted for Oakleigh in 1990 and played a total of 62 games and scored 23 goals to the end of 1994 and was a joint winner of the 1992 senior Oakleigh best and fairest award with Michael Owen (who was captain of Oakleigh). Matheu also played representative football for the VFA Under 19s in 1990 in a 4 way Victorian Under 19s competition against the Amateurs, Metro and country combined leagues.

Interesting four of the players who played their last Carlton Senior games during 1975 have sons that have played league football with another two having sons that have played reserves games for Carlton. Brent Crosswell’s son Tom Kavanagh played for Melbourne and Fitzroy between 1989 and 1994 for 10 games and 2 goals. Vin Waite’s son Jarrad is a current Carlton player and has played 50 games and scored 54 goals for Carlton since 2003, other current players are Craig Davis’s son Nick, who has played for 130 games and 176 goals for Collingwood and Sydney since 1999 and played in Sydney’s 2005 premiership side (something his father never achieved from four attempts) and Wayne Deledio’s son Brett, who was the number One draft choice in the 2004 national draft and has currently played 22 games and 14 goals for Richmond (all figures to the end of the 2005 season). With Bryan Quirk’s son Matheu playing 12 games for 3 goals in the reserves between 1991 and 1992 (he also played in the Under 19s) and Brian Walsh’s son Darren played for Carlton reserves in 1993 for 18 games and 8 goals and later played for Geelong reserves and captained Bendigo Diggers in the VFL (old VFA). Greg Kennedy and Graeme Robertson are the two players who are not involved and I don’t know if they have any children.

Quirk would win the Fothergill / Round Medal in 1990 it is presented to the most promising young talent in the VFL competition.