Blown away in the first half, the Blues fell to the last-placed Brisbane Lions by 4 points at the Gabba.

Finding a way to describe the devastation among Blues supporters after this bewildering defeat by the Brisbane Lions was a tough ask. Earlier in 2016, the Navy Blues had easily beaten the Lions at Docklands Stadium to register their sixth win in 11 matches. Carlton’s form since then had been relatively poor, but Brisbane’s had been nothing short of abysmal. Anchored at the foot of the ladder, the Lions had won only twice all year, and had lost their previous two matches by a combined total of 232 points. In the wake of those hidings, Brisbane coach Justin Leppitsch had stated that half of his players were not up to AFL standard. That may have been the case, but in this game, they blew a lethargic Carlton side off the park in the first half and held on to win by four points. 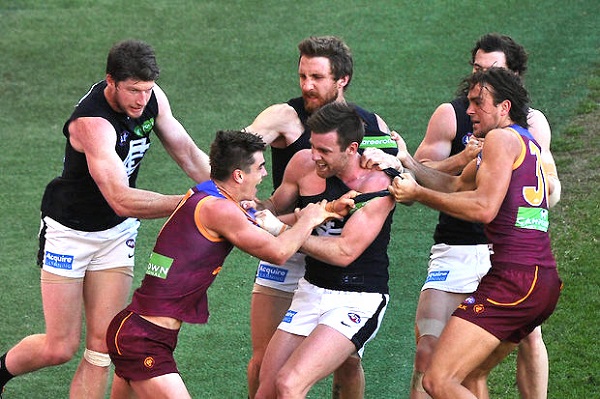 After Andrew Walker retired and Nick Graham was omitted, the Blues recalled forward Liam Jones and promoted recruit David Cuningham for his first senior game. The Queensland capital provided a typically warm and sunny Saturday afternoon, and a sparse crowd of less than 18,000 at the Lions’ Woolloongabba base.

The visitors got away to a good start by kicking the first two goals, and the match seemed to be running to script until Brisbane changed up a gear and began to take control. With their midfield leaders Rockliff and Zorko running amok, and former Blue Mitch Robinson clamping down on Pat Cripps, Brisbane slammed through five unanswered majors (amid seven for the quarter) to snatch a 24-point advantage at the first break.

Brisbane kept the hammer down in the second quarter and pulled further in front when Zorko nailed a great snap shot from the 50-metre line for Brisbane’s third for the term. Jack Silvagni answered for Carlton when he dodged his way through a pack and snapped over his left shoulder, then Blues fans shuddered as Cripps limped off the ground, having suffered a knock to his heavily-strapped knee. At half-time, Brisbane had broken away by 40 points, and it was crisis time in the Carlton coaches’ box.

Blue spirits lifted considerably when Cripps recovered and returned to the game for the third quarter, as Levi Casboult marked and goaled inside the first minute of play. Carlton’s defence – tissue thin in the first half – had tightened up, and the Blues began to chip away at the deficit. When Dylan Buckley broke from half-back and found Silvagni in the right forward pocket, Jack calmly brought up full points under intense pressure, and with a quarter left to play the Blues were back in the game at 25 points down.

Perhaps the most frustrating aspect of this defeat was that Carlton could have – indeed, should have – forged on to victory in the last term. The Blues had more effective disposals, clearances and forward-50 entries than the Lions, but squandered opportunities in front of goal and fell a kick short. Not for the first time in 2016, Carlton’s lack of depth in the midfield and shortage of options in attack had been painfully exposed.

In a match almost bereft of positives, Patrick Cripps was a beacon for the Blues. Heavily tagged throughout and injured for a considerable part of the second quarter, “Crippa” led by example with 24 disposals (22 contested) 11 clearances and 8 tackles. Ed Curnow, Zach Tuohy and Kade Simpson plugged away, while Jack Silvagni’s three goals were all classy efforts.

Debut : David Cuningham
Losing Streaks : This was Carlton's 9th loss in a row