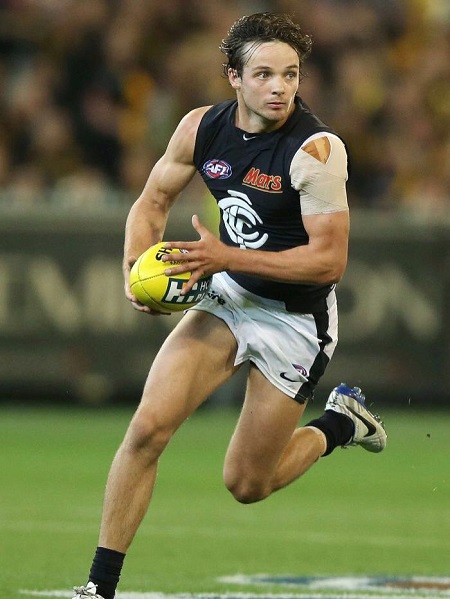 The recruitment of Dylan Buckley - son of triple Carlton Premiership player and Hall of Fame member Jim Buckley - was unusual in that although he was picked up under the father/son rule in the 2011 National Draft, he had actually committed himself to Carlton well before the 2010 season had even begun.

“Bucks” spent a considerable part of his childhood growing up within earshot of Princes Park, and was steeped in the traditions of the Old Dark Navy Blues well before he grew into a talented, if slender teenage midfielder for the Northern Knights in the elite TAC Cup competition. Having represented Vic Metro in the 2010 National Championships, he was one of a number of promising youngsters targeted by expansion club Greater Western Sydney, but both he and his dad were determined to get him to Carlton as a father/son selection.

In April 2010, on the eve of a tour of South Africa by a squad from the AIS-AFL Academy, Steven Icke and Stephen Kernahan from Carlton held discussions with Dylan, then approached Jim. “They said, ‘This is what we offer’ and we said, ‘that's fine’ and after a handshake it was done”, Dylan said later. All that remained was to see if a rival club was prepared to make a bigger bid and force the Blues to match it. When that didn’t eventuate, Buckley junior officially became a Carlton recruit with the club’s third selection (number 62) in that year's AFL National Draft.

Jim Buckley wore guernsey number 16 throughout his decorated career with the Navy Blues, and by circumstance the same number was available (because of the departure of Shaun Grigg to Richmond) when Dylan followed his father through the doors to the locker room at Princes Park. But Buckley junior was determined to make his own mark in the game, and settled instead for number 7.

Unfortunately, Dylan’s first twelve months on Carlton’s list were hampered by injury, including torn ligaments in an ankle, and his left ring finger. But his talent was obvious when he came back to play some sparkling VFL matches for the Northern Blues in the latter part of 2012. He continued that form through the 2013 pre-season, and was selected to make his senior debut as Carlton’s substitute against Geelong in front of a bumper crowd of 43,000 on a warm April Saturday night at Docklands Stadium in round 3.

Carlton suffered a heavy blow in the first quarter of that match when Matthew Kreuzer broke a thumb, so Buckley was called into the team much earlier than anticipated and ran out to start the second term. After less than a minute of play, Dylan swooped on the football deep in the left forward pocket and goaled with his first kick - a beautiful left-foot snap - to keep the Blues well and truly in the contest. Carlton eventually lost by 16 points, and Dylan was sent back to the Northern Blues after that one brief taste of the big time.

Later in the year ‘Bucks’ suffered another setback when he damaged a shoulder, so he didn’t get another opportunity at senior level until season 2014 got underway. Overlooked for the first game of the year against Port Adelaide, he was a late inclusion for round 2 against Richmond, and could scarcely have been more impressive. Ranging across half-back, Dylan showed poise and pluck to rack up 18 possessions and 6 tackles – winning himself an AFL Rising Star nomination as the Blues fell to the Tigers by 12 points.

From then on, Carlton endured a lacklustre season that only got worse when Buckley broke a bone in his hand in the match against Brisbane in round 11. In his eight games for the year beforehand, he had genuinely impressed, but this setback ended his season prematurely and robbed Blues supporters of some badly-needed encouragement. While he was sidelined, Dylan made a point of staying involved in club activities, doing all he could to encourage those around him. His commitment didn’t go unnoticed, and at season’s end he was awarded a pair of worthy accolades – the Spirit of Carlton award, and the Bert Deacon Trophy for Best Clubman. 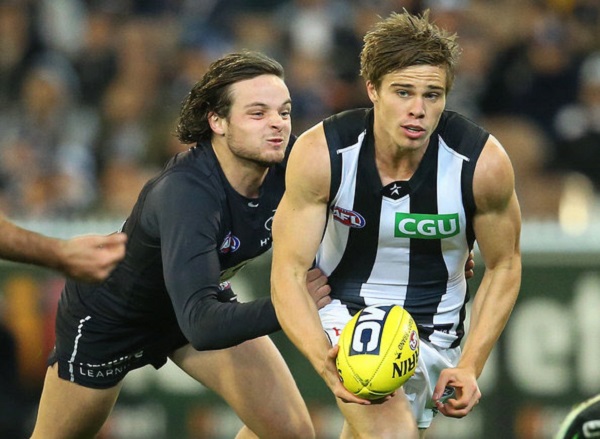 Prior to season 2015, the Blues were confident of climbing back up the ladder after a succession of lean years. However, those expectations were soon shattered by heavy defeats in the first three games, and from then on, the situation just got worse. Amid an alarming list of injuries at the half-way stage of the season, senior coach Mick Malthouse was sacked, and the club struggled through the year to finish last.

One of the few positives to come out of that truly awful time was the emergence of Dylan Buckley as a first-choice senior player. Ranging across half-back, with regular stints in the midfield, Dylan’s intensity at the contest and infectious enthusiasm in his 18 matches for the year shamed some of his more experienced team-mates, as Blues supporters took him to their hearts.

After a season with few real highlights, ‘Bucks’ was voted the winner of Carlton’s Mark of the Year and Goal of the Year in a supporter poll – recognising his brilliant left-foot snap-shot from deep in the left forward pocket in round 14 against the Western Bulldogs, and his courageous tumbling mark running back with the flight of the ball against Richmond in round 15.

Brendon Bolton was appointed senior coach of Carlton from 2016, and the Blues started another season with four straight losses. Buckley seemed out of favour at first, and a three-game suspension incurred in a VFL game in early May didn’t help his cause. But he worked hard to improve, and eventually earned a recall for his fifth senior match of the year against West Coast at the MCG in round 17. From then on, Dylan was valuable in all of the Blues’ remaining six games – especially the shock victory over Melbourne on a wet Sunday afternoon in round 22 at the MCG. ‘Bucks’ kicked three excellent goals that day, including a bomb on the run from outside the 50-metre arc during the second quarter that inspired his team.

He still needs another few kilos of muscle on that lean frame of his, and another pre-season or two to build his endurance – but there's no doubt that Dylan Buckley bleeds navy blue, and that his best years are yet to come.

Dylan was the first player recruited by Carlton under the father/son rule since Luke Blackwell, in the 2004 AFL Draft.
He was also the Blues' first Rising Star nominee since Jeff Garlett in round 19, 2010.