The MCG scoreboard went up in flames, and Carlton lost to Richmond in Andrew McKay's 150th game.

There was a sensational incident prior to this match, when an electrical fault started a fire that badly damaged the MCG scoreboard. Spectators from the immediate vicinity were shepherded on to the arena, and the game was delayed for half an hour until the blaze was extinguished. 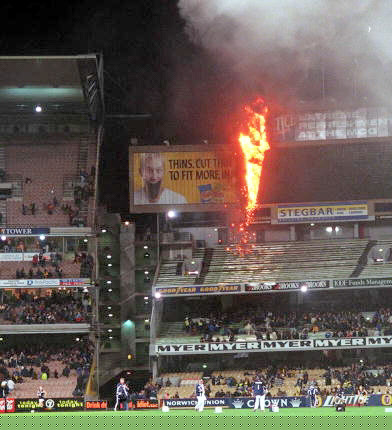 On the previous Monday night, Richmond coach Jeff Gieschen had resigned, ending a fruitless three-season stay at Punt Road. Therefore, with their futures under a cloud, the Tiger players came out snarling from the first bounce, and were never headed. Carlton did stage a spirited last-quarter revival to get within a couple of kicks, but time ran out and Richmond emerged victorious by 11 points.

This was an ominous portent for the following week’s final against Brisbane, who were in great form. Carlton coach David Parkin was greatly disappointed in his team – especially because it was Andrew McKay’s 150th match - and he made his feelings clear behind closed doors immediately after the game.

Best for the Blues were Craig Bradley, who picked up 30 possessions and three Brownlow Medal votes, Matthew Allan (22 disposals, 27 hit-outs, 2 goals) and Justin Murphy (29 possessions). Lance Whitnall kicked 4 goals, and was a constant threat to the Tiger defence.

Despite this defeat, Carlton ended the 1999 home and away season 6th on the ladder, with a percentage of 103.0%.