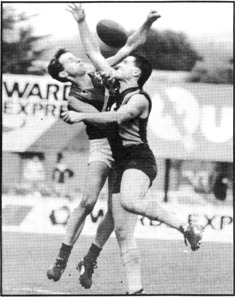 Darren Read (the player pictured on the left playing for Dandenong) was selected at Pick 20 in the 1990 mid-season draft, he was the Blues second pick overall of that draft. When Read was drafted by the Blues, he was the third VFA player that they drafted this season, the other two being Coburg duo Adrian Bassett and Tim Rieniets. Read was a dashing rover recruited from VFA club Dandenong, he was very unlucky to miss selection in the VFA team which played in the ACT on the Queen's Birthday weekend.

Read, 21, started out with North Melbourne U/19's before moving to Leongatha, where he was a trump card in their La Trobe premiership in 1989. Read missed out on playing in the 1990 Reserves premiership Carlton, but he was a part of the squad and featured in the team's permiership photo.

In 1991, Read headed back to his VFA club Dandenong in which he played in the premiership team that season.