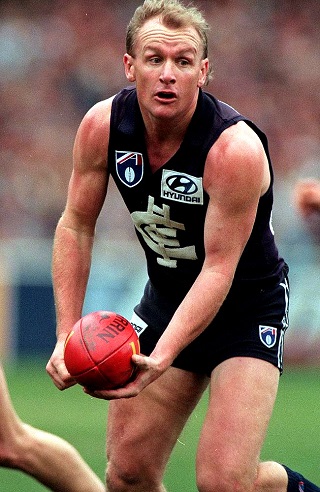 
Off the field, Craig Bradley was a somewhat quiet, unassuming character who never hungered for the spotlight. But when the umpire’s whistle blew for a game of Australian football, he became a consummate professional whose outstanding ball-winning ability, accurate disposal, punishing non-stop running and longevity in the game made him one of the all-time greats. “Braddles” captained the Blues for three years, won two AFL Premierships, and picked up almost every possible honour in a stellar career that spanned 17 seasons and a record 375 games for the Carlton Football Club.

He began his football journey at Pooraka in outer-suburban Adelaide, where his father was coach of the Under-19 team. Craig was a stand-out junior footballer, and in 1981 he was recruited by SANFL club Port Adelaide. At the same time, Essendon also made a big pitch for his signature. The Bombers were very intent on getting him to Windy Hill, but Bradley wasn’t then ready to make the big move interstate.

Essendon redoubled their efforts after Bradley’s sensational debut year for Port Adelaide, which culminated in the Magpies’ 51-point demolition of Glenelg in the Grand Final. Playing on a wing, but roaming the length of the ground, 17 year-old Bradley was one of his team’s best. He followed up by winning Port’s Best and Fairest in 1982, before departing for England later that year, as a member of the Australian Under-19 cricket team. Cricket was Braddles’ other great sporting passion, and he would eventually play two Sheffield Shield games each for South Australia and Victoria, before giving the game away to further his football ambitions.

Because of his cricketing commitments, Bradley missed most of the 1983 pre-season with Port, but it made little difference, because he had another dominant season for the Magpies and was named All Australian for the first time. Two more Port Adelaide Best and Fairests followed in 1984 and '85 – with the latter complemented by All Australian honours again.

In that year of 1985, four South Australians were named as All Australians; Bradley, Stephen Kernahan, Peter Motley and John Platten – and to the chagrin and envy of every other VFL club (especially Essendon) the first three all signed to play with Carlton. In the following year that trio of stars took to VFL football like they were born to it, and a time of bubbling confidence began for the Old Dark Navy Blues.

Braddles wasted little time in announcing his arrival into the upper echelons of our national game by playing in the 1986 Grand Final in his debut season at Princes Park; the same year he won his first Carlton Best and Fairest award in a tie with Wayne Johnston. The Blues lost heavily to Hawthorn on Grand Final day, but twelve months later bounced back to snatch the 1987 flag from the Hawks in Bradley’s 47th senior match.

By then, he was already a budding champion whose amazing stamina was too much for almost every opponent. He simply ran his taggers into the ground, and he was as effective in the last minutes of a game as he was at the start. He won two more Carlton Best and Fairest awards in 1988 and 1993, and by the end of his superb career had been an All Australian six times.

Aged 32, he picked up his second Premiership winner’s medallion in 1995 when the unstoppable Kernahan-led Blues demolished Geelong in a one-sided Grand Final, but those who thought he might retire after that triumph were right off the mark. He still had his zip, his footy smarts and his brilliant foot skills, and he had transformed himself from a purely attacking weapon into an equally-effective sweeper across half-back. And to cap off a memorable season, he became one of only a handful of players to be inducted into the Carlton Hall of Fame while still playing out their career.

In 1997, at the age of 34, Bradley won the Sunday Age Footballer of the Year award. ”It’s not the end of the world when you reach 30,” he said in a blunt response to those who kept asking how long he intended going on – to his considerable annoyance. 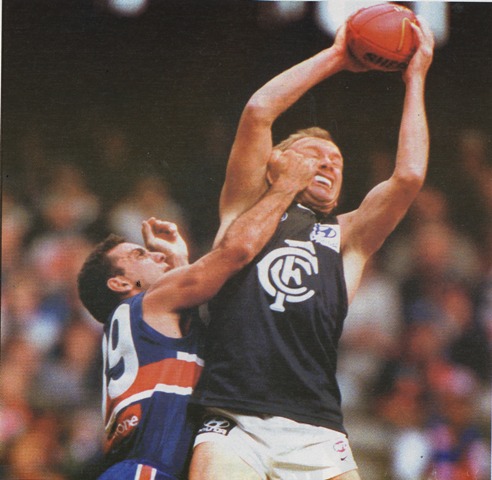 After being named All Australian yet again that year, he answered all those sorts of questions when he was appointed captain of his beloved Blues in 1998 – after the retirement of his great mate ‘Sticks’ Kernahan. Braddles led the Blues into another Grand Final in 1999, but the Wayne Carey-inspired Kangaroos proved just too good.

Further indication of Craig Bradley’s enduring ability was his record in the often controversial and passionately-contested International Rules Series against Ireland. He first played for his country in 1984, and was recalled again in 2000. He was appointed captain of Australia in 2001, and played a fourth round of matches in 2002 at the age of 38 – a truly amazing achievement.

In the millennium year of 2000, the honours kept rolling in for Braddles when he was included in both Carlton and Port Adelaide’s Team of the Century. In turn this raised the usual debate over why he had never won the game’s most prestigious individual award, the Brownlow Medal. The answer was apparently found when former field umpire Peter Cameron was interviewed, and he revealed that during most games, Bradley regularly back-chatted the men with the whistle. “He’s in the umpire’s ear all the time,’ said Cameron.

By circumstance, Braddles wore his iconic number 21 guernsey for the last time against Port Adelaide at Princes Park in round 19, 2002. Carlton lost the match by 9 points, and Bradley suffered broken ribs and a punctured lung in a heavy collision. Even so, he was an almost unanimous choice as Best on Ground and was given three Brownlow Medal votes by the umpires.

A few weeks later, Bradley’s farewell was typical of his nature. There was no big press conference, no stage-managed extravaganza. Instead, he issued a written statement through the AFL that caught everyone – including the Carlton Football Club by complete surprise. It read (in part);

I have many people to thank and will do so in the coming weeks. I would however like to thank the Carlton Football Club and the Port Adelaide Football Club for many wonderful times and for their influence in helping to shape my life. To leave the game with a bit left in the tank and in good personal form makes me feel good.

Since the foundation of the VFL in 1897, only three men (Michael Tuck, Kevin Bartlett and Simon Madden) have played more senior games than Craig Edwin Bradley of Carlton. A true Blue champion, he is one of only ten official Carlton Legends, and in 2006 was Carlton’s 17th inductee into the AFL Hall of Fame.

In October 2006, it was announced that Bradley would return to the club for season 2007 as an assistant to senior coach Brett Ratten – a role he filled with the same intensity as he showed on the field. 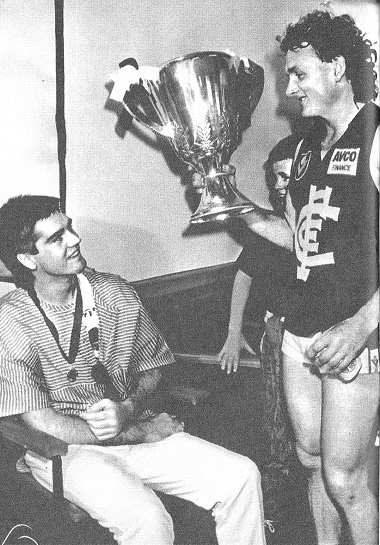