A close win, despite being 30 points down at the last change (A record...see below) and the Blues kept in touch with the top of the ladder. Poor kicking by the Blues almost cost them the game, despite kicking one less goal, the Blues ended up winning this game (simliar to the 1968 Grand Final where the Bombers kicked more goals than the Blues but still lost the Grand Final).

The Blues were slow out of the blocks and Essendon kicked two quick goals. Carlton's kicking and passing was poor. However Ron Savage managed to kick a goal and then Jim Mooring snapped one to level the scores at 2.4 apiece. The visitors then ran away with the game and added 3 goals to lead by 18 points at quarter time. 2.4 - 5.4
Early in the second, Frank Anderson and Fred Fitzgibbon combined well to get the ball to Ron Savage and he reduced the margin by six points. However Essendon replied with two quick goals, and they now led by 4 goals. Carlton were now playing desperate football and another snap from Jim Mooring bought up full points. But just as quick, the lead was restored back to 4 goals. Bob Green's long snap just made the distance, but again the Dons replied. Just before half time Ron Savage, playing a lone hand on the forward line scored two goals. These two majors reduced the lead to 14 points. 7.9 - 10.5
At half time the Blues made positional changes, Frank Anderson to full back, Bob Chitty centre half back, Bob Green to the centre and Vin Brown to the half forward flank.
The Blues had added a point when a kick off the ground went through for Essendon. They then increased their lead with another goal. The Blues had a chance but Ron Savage's long drop kick just swung away at the last moment. A brilliant finger tip mark resulted in another Essendon goal. The deficit at three quarter time had blown out to 30 points. 7.14 - 13.8
Through Jim Mooring's great persistence, Alec Way was able to launch a long punt which went through. Alec Way then received a free after he had disposed of the ball and his shot bought up Carlton's ninth goal. The Carlton crowd were finding their voice. For the best part of ten minutes each side attacked but both were breaking down in front of goal. The lead was now 17 points with the Dons in control. Jim Mooring with a beautiful 60 yard drop kick split the centre of the goals and the crowd erupted. Then Ron Savage marked and goaled to edge the Blues closer. When Charlie McInnes replaced the injured Jim Clark, the Blues were running over the visitors. Then Ron Savage was freed but he was a long way from home. His long kick levelled the scores. Carlton then went straight into attack and Jack Wrout's snap for goal missed, but the Blues had hit the front by one point. Ron Savage then added another goal to make the match seemingly safe, but when Essendon replied with a late goal the margin was just two points.Then the bell sounded almost as soon as the ball was bounced and the Blues had won with a remarkable final quarter fight back. 13.17 - 14.9

At the end of this round Carlton were in 3rd spot on the ladder with a percentage of 114.1. 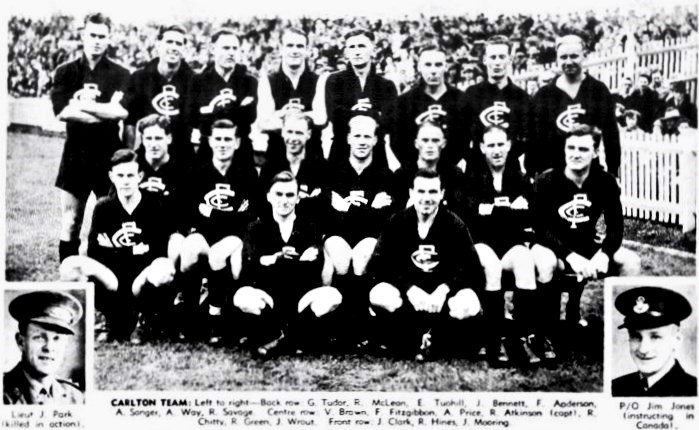 Last Game: Ted Tuohill
Score Records: This was the equal biggest deficit Carlton had ever come back from at three-quarter time, equalling a game in 1942.