Carlton defeated Fitzroy by an even 2 goals at the Brunswick Street Oval. A great start to the season with 6 consecutive wins.

The Blues went into this game playing injured men in Martin Gotz (knee) and Mick Grace (ribs). Gotz broke down from almost the first bounce and they were virtually more than one man short for the entire game.
The navy blue juggernaut rolled on and registered a sixth straight win in this match at the Brunswick St oval, defeating top-four challengers Fitzroy by 12 points. Carlton’s best once again was Frank Caine, whose four goals kept him on top of the League sharp-shooters list. Another forward in good form was Norm Yeo of Essendon. His two majors and numerous assists helped the Same Old to a surprise win over Collingwood at East Melbourne, allowing Essendon to leapfrog the Magpies into second place.

At the end of this round Carlton were in 1st spot on the ladder with a percentage of 168.2. 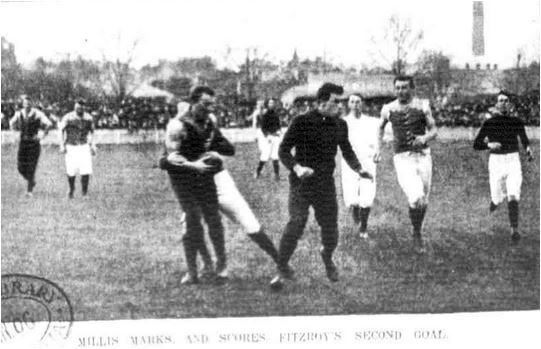 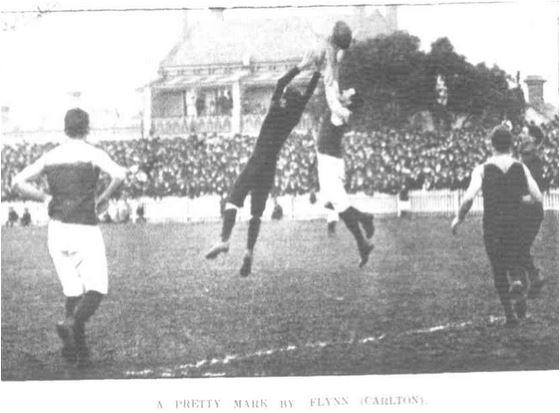 Above Carlton's Frank Caine far left, note the goal umpire with his flags resting against the fence. Carlton Ale 3d (2c) on the refreshment section of the brick entrance gates.
This structure (and the house to the left), near the corner of Freeman & Brunswick Streets were still standing in 01/01/2009 when the most recent Google Earth image was taken.
Images: Trove; Punch June 14 p18 1906
Round 5 | Round 7