Although Carlton won this game by ten goals and made it four wins in a row, the team they beat was a poor one that had not tasted victory all season. Still, it was another clinical performance by the Navy Blues, who boosted their percentage to 133.73 and maintained their place on top of the ladder. Essendon was second, ahead of Richmond, St Kilda and Hawthorn.

Carlton continues on its merry way towards the premiership. North Melbourne gave Carlton some trouble in the first quarter but although the Kangaroos tried right through the game, they had no chance over the last three quarters. Alex Jesaulenko was superb again and he and wingman Bryan Quirk saturated the forward line with long, driving drop-punts. Carlton's side is packed with pace and the only blemish on Saturday was a rather indifferent approach to goal. Full-forward Greg Kennedy didn't get many chances but I suppose it doesn't really matter how you get the goals..... as long as you get them. Robert Walls and Syd Jackson were extremely busy on the half-forward line. Jackson is a very clever half-forward. His ability to 'disappear' and get out on his own, and his co-operation with Alex Jesaulenko were a delight to watch. The biggest difference was the enthusiastic Carlton players continues to run all day and were always helping each other, while North gave up if they couldn't get the ball themselves. - Polly Farmer; The Australian.

I was not completely happy with our win, even though the scoreboard said it was convincing. North showed greater determination than we did early in the game. However, we won by 10 goals and this was the winning margin I asked for. - John Nicholls. 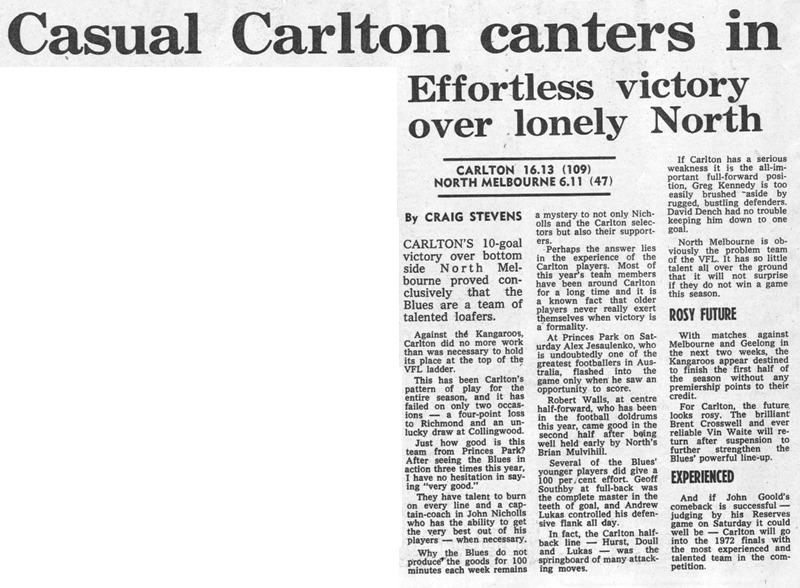