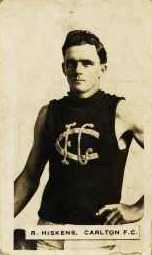 The youngest of four Hiskins brothers to play VFL football, Rupert ‘Rupe’ Hiskins was a dasher who sometimes ran himself into trouble by trying to do just a bit too much with the ball. Tall and athletic, he played as a follower and rested in defence, either on a half-back flank or a back pocket, and loved to take off on searching runs downfield throughout his five seasons in navy blue.

Rupe was born into a large family of nine boys and five girls at Rutherglen in northern Victoria in 1893. Three of his brothers; Fred (born 1878, 50 games and Premiership player at Essendon), Stan (born 1880, 66 games with South Melbourne) and Arthur (born 1886, 185 games and the 1909 Premiership team at South Melbourne) all made their mark in VFL football. Before Rupe was able to add his name to that impressive list however, there was a war to be won.

In April 1916, Rupe enlisted for active service in World War 1. He gave his occupation as a blacksmith, but like many bush-bred youngsters he was also a capable horseman and a crack rifle shot. Those skills fast-tracked him into Australia’s iconic Light Horse Brigade, and by October of that year he was in the Middle East, where he was trained as a machine gunner. Barely weeks after completing his training however, Rupe contracted a skin infection that caused painful abscesses on his body. This problem sent him to hospital regularly throughout his military service, and it only cleared up properly when he eventually returned home at the end of the War in 1919.

Having done his duty and survived, Rupe set about emulating his three brothers by having a tilt at VFL football. Although he was 26 years old by then, there were plenty of opportunities at all nine clubs in those bleak post-war years. Free-running, six-foot plus defenders like Hiskins were a scarce commodity, and Carlton coach Norman Clark wasted little time in getting Rupe into his team. He made his debut in round 1, 1920 against South Melbourne, in a match notable not so much for Carlton’s easy win, as for the knee injury that ended champion centreman Rod McGregor’s career.

Hiskins took very little time to find his feet at elite level. He played 18 matches in his debut year, and by mid-season had formed a very good first ruck combination with Bert Boromeo and Lyle Downs. Something of an extrovert who responded to big occasions, he was named among the Blues’ best in a good win over Richmond in the 1920 first Semi Final, and again in a bitterly-disappointing Preliminary Final loss to Collingwood.

In 1921, despite the tragic death of Lyle Downs, who collapsed and died after training on the Thursday evening prior to round 9, the Blues fought their way into the Grand Final, only to lose an agonisingly close contest to Richmond by four points. Rupe revelled again in the heady atmosphere of the MCG in September, and had an outstanding final series. His usual dash was curtailed by miserably wet weather throughout the month, but his skill at ground level and his long kicking proved invaluable to his team.

Rupe played finals football for the third year running in 1922, but Carlton fell at the first hurdle again and lost the first Semi Final to Essendon by five points - the Blues’ average losing margin in each of their three previous finals.

In 1923, after an unbroken run of finals appearances stretching back to 1914, Carlton fell off the pace and toppled to seventh. The team was disrupted mid-season when Bert Boromeo departed Princes Park in acrimonious circumstances, and for the remainder of the year, Hiskins was often asked to take on the responsibility of leading the Blues ruck division.

Rupe soldiered on until round 17, 1924, when he retired after 74 games in Carlton’s number 5 guernsey. The Blues were thrilled to send the popular big bloke off with a victory over Geelong, but it was a lucky win indeed. Final scores were Carlton 9.7 (61) to Geelong 6.18 (54).

Two other Blues who fought in World War 1 – Billy Blackman and Stewart McLatchie – also finished up that afternoon, but by coincidence they, Hiskins and two other ex-Blues in Walter Raleigh and Morrie Ewans were reunited at VFA club Brunswick in 1925.

Under captain-coach “Sir” Walter Raleigh, the VFA Magpies had a fine season, culminating in a 16-point defeat of Port Melbourne in a pulsating Grand Final. All five former Bluebaggers were good contributors in the decider, which proved to be the ideal swansong for the careers of Ewans and Hiskins.

In his later years, Rupe returned to the bush and enjoyed the many benefits of a large and close-knit family. He passed away at the Heidelberg Repatriation Hospital on March 9, 1976, aged 82.

Rupe Hiskins was selected in the 1924 Victorian team that played N.S.W. in Sydney August 09, and in Melbourne August 16. The Vics won both matches.