Along with Jim Buckley, our youngest-ever Blue. 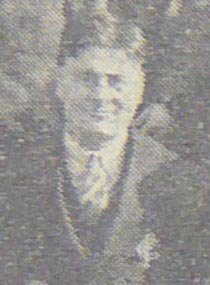 
When Ted Pollock ran down the visiting player’s race and out on to the Junction Oval as a member of Carlton’s team to play St Kilda in round 9, 1930, he became the youngest-ever senior player to represent the Carlton Football Club. At 16 years and 200 days old, Ted was 121 days younger than the previous record holder; Harry Gyles, who had made his debut for Carlton way back in 1897.

Ted was born in Brunswick North, he was a strapping youngster already more than six feet (183 cm) tall on that auspicious occasion, and maturity would soon see him grow to 187 cm and 95 kg at his peak. His career at Carlton covered eight years, but only seven football seasons and 43 games. In fact, the period between his first and second matches stretched to almost two full years. Although the Blues were regular finalists, he was into his fifth season before he experienced the thrill of September football, and he had played his last game by his 24th birthday.

Ted found his way to Princes Park along the well-worn path from Carlton Juniors; the Blues amateur affiliate. He was apparently an outstanding prospect, however it was still a big surprise when Carlton coach Dan Minogue handed him guernsey number 16 and a place in Carlton’s firsts for that match at the Junction Oval. Ted then warmed the bench as 19th man all day without getting a run – while Carlton beat the Saints by 15 points, and it all must have seemed a bit anti-climactic.

Perhaps it was even more so when Ted was omitted from the side for the following week, and shortly afterwards, left Melbourne to spend more than a year living and working in Queensland. While up north he missed the entire 1931 season, and didn’t pull on the navy blue strip again until June 1932, when he returned to Princes Park and was included in the side that played Melbourne in Carlton’s first, and only VFL game at the Motordrome – a sporting field ringed by a speedway, situated where Olympic Park now stands.

Pollock started on the ground that afternoon, supporting Charlie Davey in the ruck (and celebrating the first of his 20 career goals) during a clinical 24-point win. Four more matches followed, before Ted was overlooked for a place in all three of Carlton’s finals teams. After that, he didn’t strike his best form until 1934, when Minogue began using him as a stand-in or decoy full-forward to ease the pressure on champion full-forward ‘Soapy’ Vallence. Pollock played 13 games and kicked 10 handy goals in that role, while the Blues wilted late in the season, and wound up fifth on the ladder.

Ted eventually got the chance to play in a final on the MCG in September 1935, when Carlton’s new coach Frank Maher opted for extra height in the forward line, and included him at half-forward in Carlton’s team that met Richmond in one Semi Final. For most of the match Carlton were the better team, but wasteful kicking for goal cost the Blues dearly, and the Tigers came out on top by 21 points.

Pollock’s second and last finals appearance came in 1936, when he was asked to lead Carlton’s ruck division against Melbourne in the first Semi Final. The Blues started as warm favourites, only to squander opportunities again and lose by 9 points; 11.22 (88) to Melbourne’s 14.13 (97).

Ted didn’t play seniors again for almost a year after that defeat, and his only game in 1937 proved to be his last. It came in round 18, at the Western Oval against Footscray, when ‘Soapy’ Vallence kicked five goals, and Carlton won a free-wheeling, high-scoring contest by 22 points. Pollock and Rod McLean were effective in the ruck for the Blues, with Ron Cooper busy as usual at their feet.
Pollock held on to his standing as the youngest Blue for 39 years after his last game, until a cheeky, precocious teenager from Kyneton named Jim Buckley – also wearing guernsey 16 – joined Ted in the record books on his debut against Footscray at the Western Oval in round 11, 1976. Buckley too, was 16 years and 200 days old, beginning a great career that would bring him three Premiership medals and a well-deserved reputation as one of the great Blues of his era.

Sadly, Ted Pollock did not get the opportunity to see Jim join him in their niche in Carlton’s history. Three years beforehand, in February 1973, he had passed away at the age of 59.