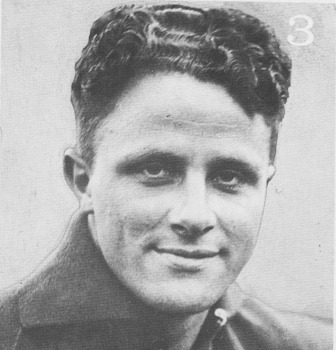 Ronny ‘Socks’ Cooper was a brilliant West Australian rover-forward who finished runner-up in the Sandover Medal as an 18 year-old in 1931. The next season, he played in Carlton’s unsuccessful Grand Final team against Richmond, on the way to building a fine career in the number 19 guernsey for the Blues. Six years later in 1938, he was denied a second Premiership medal when he was suspended on the eve of the finals.

Cooper was recruited by WAFL strugglers Claremont-Cottesloe from Albany in 1929. The skinny 17 year-old with freakish skills and speed to burn took a year or so to establish himself in the senior team, then enjoyed a stellar season in 1931 to run second to East Fremantle’s Lin Richards in the Sandover Medal - the competition’s most prestigious individual honour. News of Cooper’s potential travelled quickly across the Nullarbor, and by Christmas 1931 – with the blessing (and no doubt, financial compensation) of the Claremont-Cottesloe committee - Cooper had agreed to cross to Carlton. He was impressive, at times sensational in his debut year, as he quickly adapted to the extra speed and physical pressure of VFL football.

Playing mostly as a centreman, rover or half-forward, he dazzled opponents with his remarkable ability to lose his man and break out on his own. While this gave him space and time to work in, he wasn’t always able to make the most of his opportunities around the big sticks. In his first season and indeed, throughout his career, it was argued that Cooper’s one drawback as a player was that he missed too often when shooting for goal, especially from set shots. Nevertheless, he still averaged better than a goal a game in his time at Carlton.

After finishing minor premiers in 1932, the Blues were beaten emphatically by Richmond in a willing Semi-Final. We then bounced back to wallop Collingwood by 75 points in the Preliminary Final, and looked forward confidently to a second crack at the Tigers for the Premiership. But on Grand Final day, in front of almost 70,000 spectators at the MCG, Richmond won another thriller by nine points – despite five goals from our champion full-forward Harry ‘Soapy’ Vallence, and a plucky effort from Cooper in his first-ever senior Grand Final.

In 1935, Fitzroy champion Haydn Bunton won his third Brownlow Medal. One of the all-time greats of the game, Bunton was fastidious when it came to his personal appearance. For every match, he ran out onto the ground in highly-polished boots with whitened laces, pressed shorts, knee-length socks and immaculately groomed hair. Ronny Cooper apparently believed that all this was a lot of nonsense, and, in order to stand out as a contrast to Bunton, he took to playing without the customary elastic garters players wore to keep their socks at the correct height. Inevitably, this meant that he ran around in each game with his hosiery bunched around his ankles, earning him the nickname that he wore throughout his career. Also in 1935, Carlton coach Dan Minogue switched small defender Jack Hale into a two-pronged roving role with Cooper, and the pair clicked. Hale was a limpet-like tagger when necessary, so after he routinely took the opposition rover out of the picture, Cooper’s elusiveness and creativity was given full rein.

Although Carlton had made the finals in 1933, ’35 and ’36, the Blues regarded themselves as underachievers, until Vice-President Sir Kenneth Luke convinced the club committee to appoint former South Melbourne champion Brighton Diggins as captain-coach for 1938. In his first role as coach, Diggins was a revelation. His hard training, discipline and calm leadership by example inspired the Blues, who were heading for the minor premiership when St Kilda came to visit at Princes Park in the last home and away round of that season.

Ron Cooper's direct opponent that August afternoon was Doug Rayment; one of the Saints’ hard nuts, and a regular protagonist of both Cooper and Hale. As often happened in the heat of battle, blows were exchanged, but this time, Cooper hit Rayment in full view of the umpire. Reported, he was found guilty and suspended for four weeks. We can only try to imagine Ron’s emotions as he watched the Grand Final three weeks later. Responding to Diggins’ inspirational leadership, and with Jack Hale outstanding, the Blues beat Collingwood by 15 points in front of 96,000 roaring spectators at the MCG, to claim Carlton’s sixth Premiership pennant after a 23-year drought.

Ron’s third and last chance at Premiership glory came in 1941, amid the darkest days of World War II. The Blues were minor premiers of a depleted 11-team competition, but couldn’t produce their best when it counted most. Successive losses to Melbourne, and eventual Premiers Essendon, sent the Blues crashing out of contention and into years of bitter recrimination.

Cooper played his last game for Carlton on August 15, 1942 in a 17-point victory for the Blues over Fitzroy at Brunswick St. He was 31 years old by then, but clearly still capable of playing senior football - because in 1943 he bobbed up at North Melbourne and added two more games and one more goal to his tally of senior appearances. Later that same year, he crossed to VFA club Prahran, where he continued playing and coaching for another six seasons. Although he was devastated by the suspension that robbed him of a Premiership medal with the Blues, and many felt that he was never quite the same brilliant performer afterward, he is justifiably considered among the very best Carlton players of his era.

One interesting postscript of 'Socks' career related to him holding Carlton's goals record for Guernsey 19, a record that stood for almost 70 years - until a young Eddie Betts broke it in 2010.

Jack Hale, who perhaps more than most, was able to appreciate Ron’s talent close up, summed up his qualities like this; ‘Ron could do anything with a football. He could hide himself in a game, and then whammo – he would take on the world. He had few defensive skills, but that didn’t matter, as the opposition had to worry about what he was going to do.’

At the Carlton AGM February 03 1937 Cooper was awarded the trophy for Sterling Play.

The Mt. Barker and Denmark Record (Albany) W. A. July 04 1940 (p3) reported;
"Former Albany footballer, Ron Cooper, who, during the past eight seasons, has built up a formidable record with the Carlton Club in Melbourne, has enlisted in the A.I.F."

The Albany Advertiser of July 23 1942, had a story written by a soldier "somewhere in Australia" about army life and people he had met. The soldier was a local Albany sportsman, and wrote; "Two of my tent-mates were, in their civilian days, ardent supporters of Carlton, the Victorian League Club with which Ron Cooper has played for many years. Mentioning 'Pom's' name, this pair of Eastern Staters flared up with enthusiasm, as they have seen him figure in many memorable clashes. Ron Cooper, to them, is known as 'Curly' or 'Socks'." It is said he can't stand socks, and only wears socklets.

The Age, May 17 1937.
Ron Cooper, Carlton's first rover, who is under suspension by the committee for having struck J. Francis, during the practice matches, has made a request in writing to the committee that his suspension be lifted. An official said yesterday that action along those lines may be taken at the meeting of the committee on Thursday night.

The Age, May 21
Ron Cooper's suspension was lifted at the Carlton committee's meeting held last evening, and he has been reinstated at a player of the club. Jim Francis, as vice captain, and in consequence a member of the committee, moved the motion for Cooper's reinstatement. Cooper expressed sincere regret for his action, and the relationship between the two players was most cordial. Ron returned to the senior team on May 29 - round 6, 1937.

1938 May 30, Albany Advertiser:
Carlton footballers and gridiron players from the Stanford University in USA competed in a kicking contest. The players used both the American and Australian ball in punt, drop, and place kicking events, with Cooper taking part.
Read what Ron's home town paper the Albany Advertiser said, click here> http://nla.gov.au/nla.news-article70449088

1939 Monday, June 12, Albany Advertiser:
Ron Cooper approached Carlton on Thursday May 25, for a transfer to Camberwell (VFA). If the request had been successful, he would have received £75 ($150) from Camberwell, placed in employment of £5 10s ($11) per week, and paid a playing fee of £3 ($6) per game. By Wednesday May 31, Cooper had withdrawn his request.
He played in the match the next Saturday (June 30) against Essendon at Windy Hill, and kicked the winning goal with the last kick of the game.

Articles: Every Picture tells a story - Signatures from 1935 | Our Greatest Flagless Greats