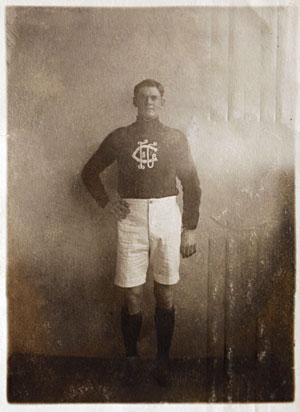 
One of eleven Blues who gave their lives for their country in World War 1, William Martin (Willie) Rogers was a defender from Wonthaggi who played three games for Carlton in 1913 after being recruited from Carlton District. Five years later, and just three weeks before the Armistice was signed in November, 1918, Willie was critically wounded in action, and died the following day at the age of 25.

The story of Rogers' military service was unknown outside his family until November 2007, when research revealed that a simple typing error had listed him in club records as William H. Rogers. No Australian with that name and initial served in the Great War, so his bravery and sacrifice was unrecognised until the truth was eventually discovered - ninety years after his death.

Willie was born at Woolamai in Gippsland in 1893, the second son of John and Mary Rogers. Four sisters completed a large working-class family. Willie and his older brother (also named John, after his father) were keen footballers who supported their family by leaving school early to take up work in local sawmills. Of the two, Willie showed the most promise on the football field as a dashing defender for Wonthaggi.

In 1913 – soon after the tragic death of his father – Willie journeyed to Princes Park to play VFL football with the Blues. He made his senior debut (wearing guernsey 28) against Geelong at Corio Oval on the King’s Birthday weekend in June of that year. Willie played as a follower (second ruckman) and Carlton won by 15 points. He moved to a back pocket for his next match (a 27 point victory over Essendon at Princes Park) while his third and last game was a disappointing 47-point defeat by ladder leaders South Melbourne at the Lake Oval. Soon after that loss, Rogers left Carlton and crossed to VFA side Brunswick.

Although she was already a widow, Mary Rogers sent both her sons to serve their country. John enlisted in July, 1915, and Willie signed on in February of the following year. Willie was trained to be part of a three-man machine-gun team, embarking for England in May, 1916. Six weeks later, he was pitched into action for the first time as two massive armies clashed in a series of offensives on France’s Western Front.

On the 21st of September 1918, Rogers was a temporary Sergeant in charge of a section of three machine-guns. Somehow – perhaps while advancing, or directing his men to a better position, he was caught in the open by enemy troops. They raked his position with their own automatic weapons, and Willie was critically wounded. Although his men recovered him alive, and he was evacuated to the nearest field hospital, Willie’s wounds were severe and he died the following day. He was 25 years old.

Willie Rogers now lies - with many other sons of the Southern Cross - at St. Sever Cemetery extension, outside Rouen.

In a footnote to Willie’s story, his brother John also served his country with distinction.

Twice wounded in action himself, he was awarded a Military Medal for ‘acts of gallantry and devotion to duty while under fire’ at Polygon Wood, during two days of heavy fighting on September 20/21, 1917 - precisely twelve months before his brother’s death.

Happily, John Rogers survived the war. Although wounded in each arm on separate occasions, he was discharged from military service by a grateful nation in March, 1919.

How A Gun Party Works

In 1918 Gunner Frank Reardon wrote to his father about what a machine gun section does, he mentions that Rogers was his No.1. In April the Violet Town Sentinel published the letter.
To read click here> http://nla.gov.au/nla.news-article129549726

Articles: Lest we forget... | The Blues at War