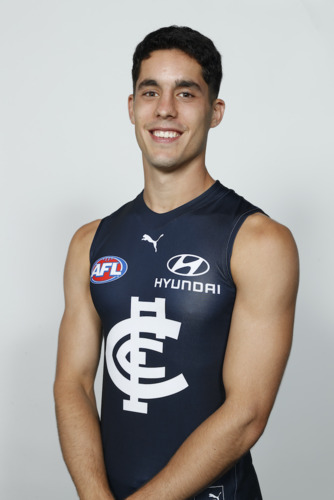 Adam Cerra is a midfielder who started his junior footy career with Norwood in the Eastern Football League and then with Eastern Ranges in the TAC Cup via Wesley College. Cerra was then selected by Fremantle with their second selection, fifth overall, in the 2017 AFL national draft. Cerra made his AFL debut for Fremantle in the second round of the 2018 AFL season. He was awarded the round 16 nomination for the 2018 AFL Rising Star award. Cerra proved to be an important player for Fremantle, finishing 3rd in the club's best and fairest in 2020, and 5th in 2021.

At the end of the 2021 season, Cerra requested a trade to Carlton. He was traded on 7 October to Carlton for Pick 6 and a future third-round selection. Cerra was also named in the AFL's under 22 team for the 2020 and 2021 seasons.

After an exciting pre-season witht he Blues, Cerra debuted against Richmond and was one of our better players in a better broader midfield. Smooth skills and smooth mover, Cerra also kicked his first goal. Exciting times for the Blues.