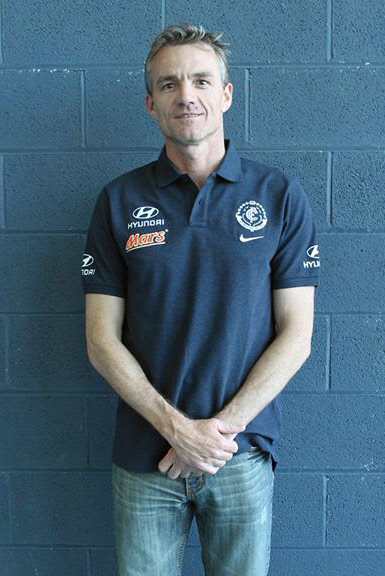 After more than 25 years of experience in the AFL, Dean Laidley joined Carlton’s coaching panel in October 2013. Renowned as a tough, uncompromising defender in his 151-game playing career at West Coast and North Melbourne, Laidley was a member of the Shinboners’ Premiership team in 1996, and later filled a variety of coaching roles at Collingwood, North Melbourne, Port Adelaide and St Kilda.

Born in Western Australia, Laidley grew up in the Perth suburb of Balga, and made his way up through the ranks to play senior football for West Perth in the WAFL. In 1986, and aged just 19, he was selected in the WA state side for matches against South Australia and Victoria, and it was his strong showing in both those games that caught the eye of the fledgling West Coast Eagles. A few short months later, Dean was a member of the first Eagles team to play an AFL match – against Richmond in round 1, 1987 - in an historic moment for the game.

In 1990, Laidley and future Carlton coach Michael Malthouse began a long, but interrupted association when Malthouse was appointed senior coach of the Eagles. However, a serious knee injury – requiring a full reconstruction - derailed the early part of Dean’s career and restricted him to only 52 matches in six seasons. So, after missing out on a place in West Coast’s 1992 Premiership team, Laidley was traded to North Melbourne. At Arden Street he became an automatic selection in the Kangas’ defence, and was among North’s best players in their 1996 Grand Final victory over the Sydney Swans. He retired as a player in 1997 after another 99 senior games, and moved on to the role of development coach.

By 2000, Laidley was seeking wider opportunities away from Arden Street when he applied for, and won, the post of assistant coach at Collingwood. Reunited with Malthouse, he was influential in the Magpies’ rise from last to a Grand Final appearance in 2002, only to be beaten by the rampaging Brisbane Lions on the way to the second of their three straight Premierships.

When Denis Pagan resigned as senior coach of North Melbourne that same year, Laidley was among the front-runners to replace him, and duly won the job. A mediocre first two seasons ensued, before the Shinboners hit their straps and went on to make the finals in 2005, 2007 and 2008. A string of unexpected losses in the first months of 2009 sparked dissension within the team however, and that led to Laidley’s decision to quit on 16 June 2009, one round before his 150th game as coach.

By September 2009, Dean had been snapped up by Port Adelaide and given the position of Director of Coaching. He spent one season with the Power before family responsibilities drew him back to Melbourne, and later, to his fourth AFL club in St Kilda. Between November 2011 and October 2013, Laidley coached the Saints midfielders – a role to he resumed at Carlton in 2014, once again under the guidance of Malthouse.

Unhappily for all concerned, Malthouse’s two seasons as senior coach at Carlton were disaster. After losing a core of talented, experienced players for a variety of reasons, the Blues tumbled to the lower rungs on the ladder before Malthouse was sacked in May, 2015. Laidley continued on and served out his contract under caretaker coach John Barker, but departed from Princes Park at the end of that season.