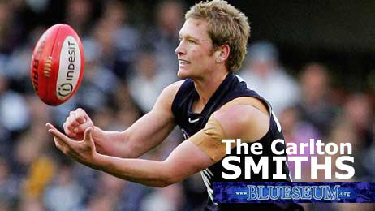 Jesse Smith was a Rookie picked up in the 2005 Rookie Draft. Smith, often referred to by his middle initial of 'D' given the emerging Kangaroo named Jesse W Smith, had been a key midfielder for the Calder Cannons in 2004 and found himself wearing #41 for Carlton. Jesse is a cousin of Essendon player Andrew Welsh.

2005 was a solid year for the hard-at-it midfielder. A horrible pectoral injury in the 2006 pre-season, rumoured to have been caused by a bench-press mishap, delayed his start to the year, but in the days leading up to Round 19, 2006 Smith found himself promoted to the full Carlton list.

Jesse made his debut after a long stint in the VFL against Richmond in Round 20, 2006. It was a quiet day for him and he was only given limited game time, managing just 7 disposals in 2 games before being dropped for the final game of the year. He had at least broken into the AFL after almost 2 seasons at the Bullants. Unfortunately his time in the AFL was short, and after a second game for the Blues, he was not retained beyond 2006.

Jesse's sister Candace was also an outstanding AFL footballer and was part of AFL Victoria's first Victorian Under 18 Youth Girls Side in 2007, after successfully representing Sunbury Junior Football Club in 2 successive premierships in 2007 and 2008.

During 2013, Smith was playing with the Mid Murray FL team Koondrook-Barham, the following season he signed to play with North Central FL club Boort.

In 2016 Jesse Smith was appointed as Portarlington’s new coach. The local newspaper noted that Smith’s appointment was announced to the playing group after training on Tuesday night. The former Carlton listed player has a vast football CV, including stints at West Adelaide in the SANFL, Oak Park in the Essendon District Football League and St Albans in the Geelong Football League. The 30-year-old is currently playing with Elmore in the Heathcote District League, where he is an assistant coach.

The full story of all Carlton 'Smiths' is explained within this Blueseum exclusive article, available here.

1971 Rd 4 - Barassi talks to players with McKay in foreground.

Mark Naley gets boot to ball.