Eight goals in his second game! 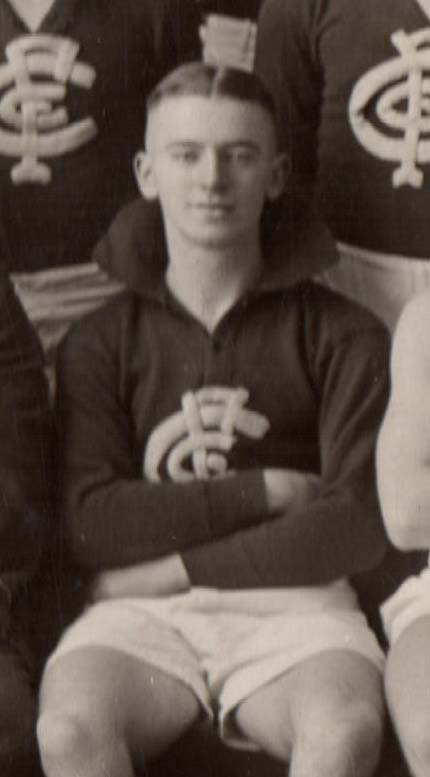 Les Allen was a mercurial, talented young forward from Wangaratta who seemed destined for a long career at Princes Park when he was Carlton’s leading goal kicker in his debut year. But after 29 matches over two seasons - during which he averaged three goals a game - he walked out on the Blues to join North Melbourne.

Allen came to Carlton from Fairfield as a promising full forward, and created a sensation in just his second senior game in 1930. Playing from a forward pocket, he kicked eight goals as Carlton thrashed South Melbourne by 54 points at Princes Park. From the rest of that year, Allen was part of a potent forward set-up for the Blues. With Horrie Clover and ‘Soapy’ Vallence in the key positions, supported by Allen, Jack Green and Ansell Clarke, Carlton’s attack was as good, or better, than any in the competition – the only problem was keeping them all on the park at the same time.

Illness, injury and the odd suspension conspired to prevent the Blues from playing this ‘fab five’ together often enough in 1930, although they were all eventually included in the team surprisingly beaten by Geelong in the first Semi-Final. Allen kicked two goals in that game – his first and only finals match – and won Carlton’s goal-kicking award with a season tally of 56.

In 1931 he continued to impress, booting 30 goals in 12 games prior to the round 17 clash against Footscray. On that cold and blustery day at Princes Park, both teams were dreadfully inaccurate around the goals, before the Bulldogs eventually gained the upper hand late in the match to win by four points. That was another shock loss for Carlton, so it’s not hard to imagine that some harsh things may well have been said in the aftermath.

The circumstances of his departure (and the reasons for it) have not been recorded, but Allen left Carlton on the eve of the 1931 finals, and joined North Melbourne the following year. He spent another three seasons at Arden St, and gave the Shinboners good value by booting 103 goals in 41 games.

Allen had been unemployed for 18 months. Mr. G. Virgin of the North Melbourne Football Club found him a job and Allen applied to the Carlton committee for a clearance on April 20 1932 (Herald April 19 p14)

In his first 6 games for the Blues, Les Allen had scored 3,8,3,3,6,6 a total of 29 goals.
The Age June 27 1930, said;
"Allen by clever anticipation, coolness and resource, plus accuracy in kicking at goal, has considerably strengthened the already strong Carlton forward division. He was recruited from the second eighteen."