It is an unfortunate circumstance that this game won't be remembered as a tight tussle between two power teams - well, unfortunate for Carlton anyway. This game will forever be remembered for Blights long torpedo goal after the siren that sailed about 65 metres (some say 100 metres) through the big sticks at the Social Club end to nail the game. 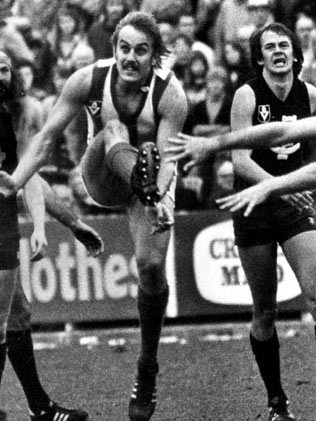 The Roos had started their premiership defence slowly, with only 4 wins to this game. The Blues, on the other hand, had earned 7 wins and sat in second place on the ladder.

The Blues sprang to life, with 5 goals to the Kangaroos' 2 on the back of the dominance of Peter Jones in the ruck. We entered the main break 27 points in the clear, but the Roos fought back to be within 15 at three quarter time.

Carlton again controlled the ball in the last, until Malcolm Blight stepped up to turn the game on its head. Blight kicked 2 goals in as many minutes with only a few minutes left, to reduce the margin to just a point. The latter goal was controversial in itself - Blight was paid a mark, but it clearly bobbled off Maclure's forearms . Blight kicked the goal.

As the seconds ticked away, the Blues looked likely until Blight marked about 60-70 metres out, depending on who you talk to. The siren blared, the crowd gasped, the torpedo slowly sailed through the air as if in slow-mo. As the screams heightened, the ball went through. The Roos had won by 5 points.

This game is remembered as one of Carlton's controversial finishes, a theme explored in a Blueseum exclusive article available here.

A miraculous goal by Malcolm Blight gave North Melbourne victory over Carlton at Princes Park. The Kangaroos were 15 points down at the final break but Blight's four goals in the last term won them the match. - Football Record.