Carlton lost to Essendon by 21 points at the MCG.

The Blues, still without Kernahan, would go down to the Bombers in their first encounter since the Round 2 Draw. Little did everyone know that these two teams would still have 2 further games to play against each other in the finals.

Carlton was in touch with the wayward kicking Bombers until the start of the last quarter, but could not maintain the pressure. The Bombers were an even team, but returned veteran Tim Watson would kick 5 on us to be a key player in our loss.

Despite the loss, Carlton would stay 6th on the ladder, 6 points shy of Hawthorn and North Melbourne. The Bombers were only a game ahead of us. 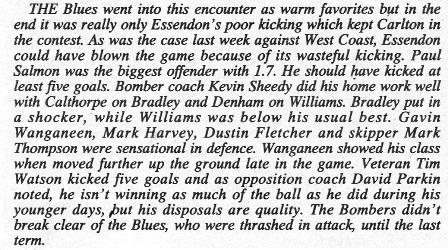