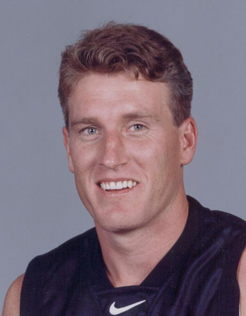 
One of Carlton’s brightest stars in the last decade of the 20th century was Michael Sexton; a skilled, resolute defender who was born in New Guinea and grew up in Bendigo in central Victoria, where his father Adrian was a stalwart of the Sandhurst Football Club. Michael and two of his brothers; Damien and Ben, were steeped in the game from an early age, and all three went on to play League football.

The eldest, Damian, turned out for four games at St Kilda in 1990, while Ben managed 43 games and 36 goals at Footscray and Carlton between 1991 and 1996. A fourth brother, Stephen played Reserve grade football for Carlton in 1995, but it was Michael who was the pick of the litter. An outstanding junior representative player with Marist Brothers College in Bendigo and the Sandhurst Dragons, Michael was recruited to the Blues’ Under-19 squad in 1989, and quickly elevated to the Reserves side.

On Anzac Day 1990, Sexton proudly wore his number 14 guernsey at senior level for the first time when he ran down the race and out onto the hallowed turf of Princes Park on debut against Footscray. Unfortunately, Carlton was not the happiest of places at that time. Robert Walls had been sacked as coach the previous year, and his replacement, Alex Jesaulenko, was finding it difficult to marshal a talented, but disunited playing list – as was painfully obvious when the Blues went down to the Bulldogs by five goals. Still, Sexton impressed with 15 disposals, 5 marks and his first career goal, and paved the way for two more appearances at senior level over the course of that year. In September, he finished the season on a positive note as a key player in Carlton Reserves’ Grand Final victory over Melbourne.

In 1991, the return to Princes Park of dual Premiership coach David Parkin heralded the beginning of another Carlton revival. Having endured football purgatory at Fitzroy, “Parko” had jumped at the opportunity to return to one of the game’s power teams, and he lost no time in proving that he was a mellower, less autocratic coach than before. That said, it took Sexton until round 6 of ’91 before he was offered another opportunity at senior level, when he came off the interchange bench in Carlton’s 34-point victory over St Kilda at Princes Park. Then in round 11, Carlton journeyed to the Western Oval to meet Footscray on one of the blackest days in the modern history of the club. In a howling wind and freezing rain, the Blues’ one and only goal for the whole game was scored deep into time-on in the last quarter, when rover Mark Arceri split the posts from a free kick. Meanwhile, Footscray had landed 8 goals, and Carlton was flogged by 41 points.

After that defeat, Parkin shook up the side for the next game against Collingwood at Waverley Park. Among the changes, ‘Sticks’ Kernahan returned from injury to centre half-forward, and Sexton was challenged to play at centre half-back. Kernahan responded with four goals in a best on ground performance, and Michael took on the responsibility of leading the defence with the cool poise of a veteran. When the final siren sounded with Carlton ahead by 20 points, any further plans by Carlton’s match committee to groom the tall youngster as a forward had been well and truly shelved. By 1993, Sexton was embedded in a rapidly-improving Carlton defence alongside Stephen Silvagni, Andrew McKay, Ange Christou, Peter Dean and Brett Ratten. He was rarely spectacular, but Michael’s steady concentration, balance and athleticism ensured that he was rarely beaten in a one-on-one contest. .

The two form teams of 1993 were traditional rivals Carlton and Essendon, who, as expected, faced off against each other for the ’93 Premiership in front of 99,000 at the MCG. The Blues started the Grand Final as slight favourites, but seemed sluggish and unbalanced from the first bounce. The ‘Baby Bombers’ blasted away to a five-goal break at quarter-time, and eventually triumphed by a huge 44 points. Like each of his team-mates, Sexton was shattered by the result, although his 17 disposals and six marks was a fine effort in a badly-beaten side.

It took two more seasons of toil and disappointment before that embarrassing defeat was atoned for. Toughened by experience, and sharpened up in attack by the clever recruitment of Dean Rice, Matt Clape and Brad Pearce, Carlton lost two games early in 1995, then commenced an extraordinary run of sixteen straight victories - culminating in a 61-point hiding of Geelong in a one-sided Grand Final. On that fine spring day, Geelong went into their fourth flag decider in seven years, with plenty of support among the crowd of more than 93,000 at the MCG. The Cats had pinned their hopes on their big guns in attack; Gary Ablett and Bill Brownless, playing alongside each other at full-forward. David Parkin went for a champion-on-champion match-up, with Silvagni on Ablett, and Sexton back into the pocket on Brownless. And in a match-winning surprise, Parko pulled a party trick of his own, sending star mid-fielder Greg Williams to a half-forward flank, and all three assignments worked a treat.

Playing one of his greatest games, Stephen Silvagni was superb all day. He kept Ablett goalless, while Sexton kept an equally tight rein on his man. Brownless did manage to put three majors on the board late in proceedings, but the match was effectively over as a contest by half-time as the Blues romped away. Williams chopped up the Geelong defence to finish the game with five goals and the Norm Smith Medal, and the football press went into rapture describing the Blues of ’95 as one of the greatest teams of all time.

Sexton’s Premiership medal came at the perfect moment for the 24 year-old. With his confidence boosted by his finals’ experience, he hit his straps in 1996 to be selected in the Victorian State team, and named All Australian for the first time. In round 22 of that season - against Geelong once again, at Kardinia Park - he dominated the game across half-back, claiming 32 possessions and taking a dozen strong marks. Carlton finished fifth, making the finals for the fourth straight year, before disaster struck in the week leading up to a daunting First Qualifying Final against the West Coast Eagles at Subiaco. Sexton rolled an ankle at training, and the resultant ligament damage saw him join Williams, Rice and Pearce on the sidelines. Gutted by the withdrawal of four top-liners, the Blues were demolished by 55 points.

Sexton and Rice returned to the team for the trek to Brisbane to meet the emerging Brisbane Bears in a cut-throat Semi-Final on the following weekend, but injuries, disruption to training schedules and three long flights took a savage toll. The Blues were never in the match, slaughtered by 97 points in the clubs’ heaviest defeat ever in a final. And that low point in Carlton’s history was compounded by the subsequent retirement of four of the greats - ‘Sticks’ Kernahan, ‘Diesel’ Williams, Earl Spalding and Mil Hanna - at season’s end. With the heart torn out of its list, Carlton plunged down the ladder to 11th in 1997, although the consistent form of their reliable number 14 was some consolation, as he held his place in the State team, and deservedly won All Australian selection again. 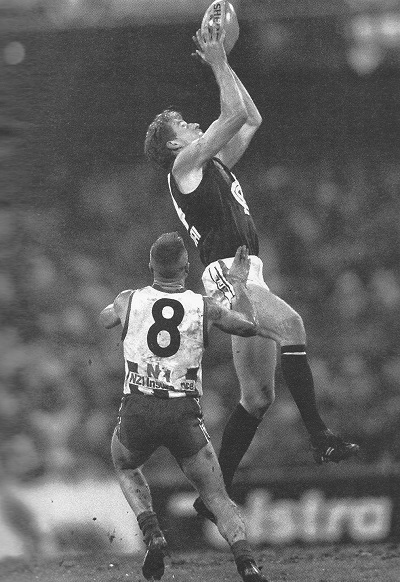 Late in that year, Michael had missed four games with a foot tendon strain – the prelude to string of steadily-worsening injuries that he was forced to carry throughout the remainder of his career. By 1998 he had become more of a utility, minding the opposition resting ruckmen or plugging holes from the interchange bench. Meanwhile, Carlton traded and drafted at every opportunity, and by 1999 had clawed their way back into finals contention. The Blues finished in sixth place in the final eight that season, a mammoth six wins shy of ladder-leaders Essendon.

However, the idiosyncrasies of the final eight system worked in Carlton’s favour, even after Brisbane destroyed the Blues by 73 points at the ‘Gabba in a Qualifying Final. Other results saw the Blues survive to meet West Coast at the MCG the following week, and this time, it was the Eagles who had to endure the long cross-continent flight. Against Brisbane, Sexton had played on a half-back flank. For the Eagles clash, coach Parkin rang the changes again by placing him in the centre for the first bounce, switching promising young forward Lance Whitnall to centre half-back, and sending defender Glenn Manton to full forward. When Sexton slotted the Blues’ first major, it triggered a seven-goal to two first quarter by the Blues, and ultimately, a boilover victory by 54 points.

That great effort set up a Preliminary Final clash with Essendon, one that the Blues looked forward to with grim determination. The Bombers were hot favourites with the football punters after a dominant season, but Carlton’s memories of the ’93 Grand Final defeat still burned deep, and there was no way that the mob from Windy Hill were going to get a shot at equalling Carlton’s record of 16 flags without shedding plenty of sweat - and if necessary, blood. On Saturday, September 18, 1999, more than 80,000 enthralled spectators at the MCG were treated to one of the greatest football matches of the modern era. Again, Parkin threw his side around at the selection table, with Whitnall switched to centre half-forward, Anthony Koutoufides to centre half-back, and Sexton in a back pocket alongside Stephen Silvagni. Carlton bounced out of the blocks to lead by 16 points at the first break, and 24 at half time, before Essendon fought back hard to be just one point behind, deep into time-on in the last quarter. It was then that Bomber Dean Wallis broke clear at half back, and charged through the centre with plenty of options ahead of him. But Carlton’s ‘Junkyard Dog’ – the tenacious Fraser Brown – mowed Wallis down in a perfect, vice-like tackle. The ball spilled free to be collected by Carlton’s Justin Murphy, and the siren wailed as the Blues hung on for a famous, unforgettable victory.

After that, Carlton’s Grand Final showdown against North Melbourne seemed somehow anti-climactic – at least for Carlton fans. In his second senior Grand Final appearance, Sexton returned to the forward line, with Silvagni named at centre half-back to counter North’s trump card, Wayne Carey. Mentally spent after an arduous campaign, the Blues were valiant all match, but with Carey working his way on top after half-time, the ‘Roos powered away to win by 35 points in front of a remarkably subdued crowd of 94,000.

That match was Michael Sexton’s 194th for the Blues, and only the lure of joining the AFL’s exclusive 200-game club convinced him to saddle up again for one last season in 2000. After a delayed start to his eleventh year, Michael’s moment came at last in round 13, against Melbourne at the MCG. Led by a rampaging Anthony Koutoufides, Carlton thrashed the Demons by 98 points, in a rousing send-off to one of the most widely admired Blues of his era.

Before the end of that year, in a fitting postscript to his career, Michael Joseph Sexton was elected to the Carlton Football Club Hall of Fame.