Coming off a humiliating hiding by ladder-leaders Collingwood in round 19, Carlton was in real danger of surrendering second place to St Kilda if we couldn’t quickly rebound with a win over Hawthorn in round 20. The Hawks had beaten Carlton at Princes Park earlier in the year, and many pundits were sure they could do it again, especially because this return match was to be played at Glenferrie Oval.
But after Carlton made six changes to the team, including the return from injury of flamboyant ruckman ‘Percy’ Jones to partner John Nicholls in the ruck, the Blues jumped back into gear with a vengeance, kicking 13 goals straight before registering their first behind - to Alex Jesaulenko - at the 22 minute mark of the third quarter. By that stage, Carlton was well on top, and we cruised to an easy win by five goals.
The Blueboys were back in town, with the finals just around the corner.

"Even time-proven Carlton slew foots Adrian Gallagher and Sergio Silvagni made no mistakes with their goal kicking." (Age August 17 p20)
The Hawks had booted 4.3 in the first 15 minutes before the Blues had scored. Robert Walls at full back aided by defenders Vin Waite and Barry Gill kept the dangerous Hudson to a respectable goal tally.

Alex Jesaulenko's 4 goals took his season tally to 90. He sat third behind Magpie Peter McKenna on 112 goals and Hawthorn's Peter Hudson whose 4 goals this day took him to a personal and Hawthorn best of 126 goals.
Both recovering from injuries Wes Lofts and John Goold should be in line for selection next week. 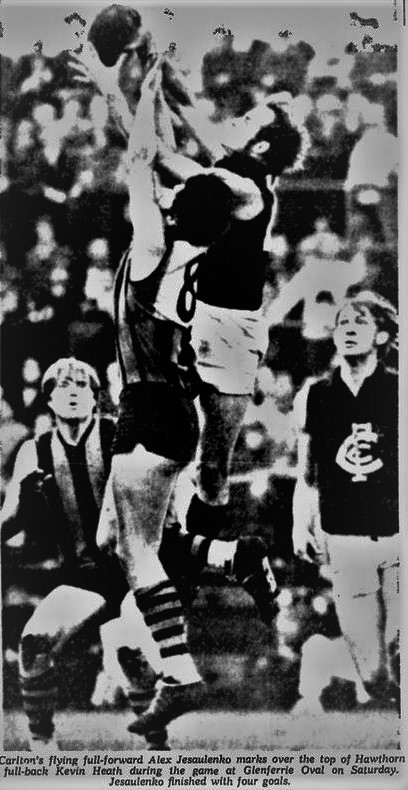 Alex Jesaulenko, David 'Swan' McKay and to be Blue Kevin Heath
Image: Age August 17
Round 19 | Round 21