In this controversial clash against St Kilda at Moorabbin, Carlton got home by five points, after the siren failed to sound at half time. Play continued for at least 20 seconds, during which time defender Barry Gill scored one of his two goals, and defeat eventually cost St Kilda a finals berth.

This game is remembered as one of Carlton's more controversial finishes, a theme explored in a Blueseum exclusive article available here.

Carlton celebrated ruckman John Nicholls' 200th game with a five point win over reigning premiers St Kilda. The game was controversial as the Blues kicked what proved to be the decisive goal after the siren had failed at half time. - Football Record.

The crowd of 44,382 set a record attendance for a Carlton game at Moorabbin, and was the third highest crowd ever at the venue. 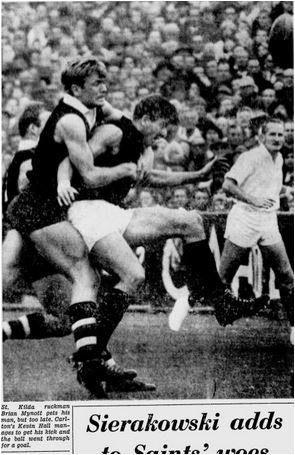 Kevin Hall scores a goal while being tackled by St.Kilda's Brian Mynott
Image: courtesy The Age May 15
Round 4 | Round 6