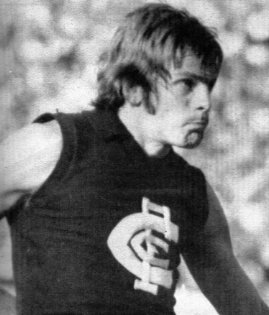 Alex Ruscuklic’s mercurial attitude and spectacular high marking made him one of Fitzroy’s most popular players during his seven seasons with the Lions, although at the same time his headstrong self-confidence often led to clashes with club officials. A powerfully-built key forward, he was Fitzroy’s leading goal-kicker in 1970, and in 1971 took more marks than anyone else in the competition – but three years later he was cleared to Carlton when he should have been at the peak of his career.

Originally from the Morwell Football Club in Gippsland’s Latrobe Valley, Ruscuklic was recruited by Fitzroy prior to the 1966 season. However, the LaTrobe Football League refused to ratify his clearance at first – making a stand, they said, against the “rapacious attitude” of VFL clubs. After a protracted wrangle, the Australian National Football Council stepped in, and Ruscuklic was eventually on his way to the Lions. 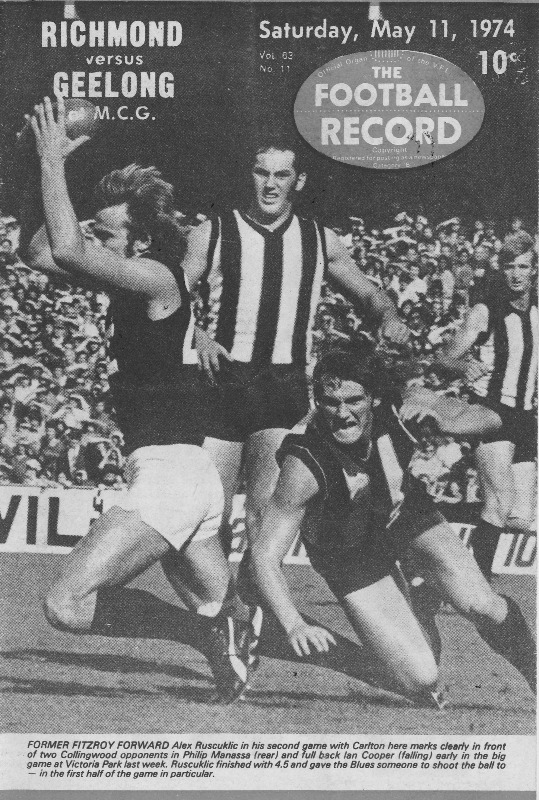 At first, Fitzroy saw Alex as a ruckman, before his aerial ability demanded that he play forward. The Lions had little success during Ruscuklic’s era (finishing in the lower half of the ladder every year of his stay) but he was Fitzroy’s first-choice full-forward by 1969 and a symbol of hope for the team’s supporters. Twice (in 1969 and 1970) he kicked eight goals in a match, but it was his exploits against Carlton in round 21, 1971 that shaped his future. On that bizarre afternoon at the Junction Oval, a heavy fog rolled over the ground as the second half began, and Fitzroy groped their way to an upset win. At centre half-forward for the ‘Roys, Ruscuklic was the dominant player on the ground in the first half, finishing the match having taken 17 marks and kicked 2.2.

Throughout his years at Fitzroy, it was an open secret that Ruscuklic required “high maintenance” because he was ever ready to question instructions from coaches or club officials. This didn’t endear him to many at the club, and when Fitzroy faded to finish eighth in 1973 he was on shaky ground indeed. Then, on the opening afternoon of the 1974 season, St Kilda walloped Fitzroy by 40 points at Moorabbin. Ruscuklic had a horror match, hardly touching the football, and shortly afterwards was told that his contract had been purchased by Carlton.

Three weeks later, Alex played his debut senior game for the Navy Blues, against North Melbourne at Waverley in round 4, 1974. He impressed by taking nine strong marks in a huge defeat, but his kicking for goal tarnished his effort and he finished with 3.6. In fact, his inability to consistently kick straight became more of a frustration as the year progressed, with his return of 1.6 against Footscray in round 19 at the Western Oval particularly galling.

By the end of that season, Carlton had faded to seventh on the ladder, missing the finals for the first time since 1968. Ruscuklic was one of the inevitable casualties when he was told that his contract would not be renewed. His nine senior games for the Blues had produced 20 goals, plus another 28 at Reserves level. His last appearance in Carlton’s number 24 guernsey came in the Reserves First Semi Final, when he booted three majors in a 4-point loss to Geelong.

After leaving Princes Park, Ruscuklic briefly joined VFA heavyweights Preston, before retiring from the field to concentrate on a business career. By 1979 he had relocated to Sydney, where he was appointed senior coach of East Sydney Bulldogs. Alex convinced his younger brother Peter (who had previously played 14 games for Fitzroy and Geelong) to join him, and Peter kicked 136 goals at full-forward as Easts remained undefeated until the Grand Final – losing a thriller of a match to North Shore.

Alex Ruscuklic was born in Germany, and grew up in Australia proficient in four languages – German, Yugoslav, Macedonian and English.

Ruscuklic currently sits equal third on the list of most goals kicked for Carlton in 9 games. On top is Harry Davie with 26, then David Clarke with 21. Rod Leffanue shares third place with Ruscuklic on 20.

In John Nicholls' autobiography "Big Nick", John wrote that when he was asked whether he wanted Ruscuklic at Carlton, Nicholls replied that he didn't. But the Match Committee went ahead and got him anyway.

Alex’s brother Peter Ruscuklic spent only three seasons with East Sydney, but was a spectacular success at full-forward, kicking 136 goals in 1979, 153 in 1980, and a record 213 in 1981. He was also awarded the Bulldogs’ Best and Fairest in 1979 and 1981. Later, he returned to Victoria and coached Myrtleford in the Ovens and Murray Football League before dying suddenly on May 1, 2014, at the age of just 58.