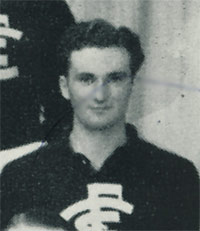 A brilliant footballer who was more than once described as good enough to win a Brownlow Medal, Clinton Wines controlled the centre for Carlton in the infamous 1945 ‘Bloodbath’ Grand Final. He and star full-back Vin Brown were the Blues’ outstanding players on that extraordinary Saturday afternoon at Princes Park, when Carlton and South Melbourne clashed for the flag only weeks after the end of World War II.

Wines himself had seen front line action as an infantryman with the 2/23rd Battalion in North Africa before returning to Australia in 1944 with the dream of becoming a pilot. His application for a transfer to the RAAF was duly granted, but instead of learning to fly an aircraft, he was assigned to training as a radio mechanic. That career change left room for his other great love; football, and in early 1945, 22 year-old Wines found his way to Princes Park.

Before enlisting, Wines had been a star with western districts club South Warrnambool, and it didn’t take long for his ability to shine through at Carlton. Although he was just 179 cm tall, he was a solidly put-together at 80 kilos. Blues coach Percy Bentley was impressed by Wines’ marking prowess and pace off the mark, and selected him at full-forward in the senior team for the first time in round three of 1945, when Carlton travelled to Windy Hill to take on the Bombers. For the third week in a row, the match was a disaster for the winless Blues, who were slaughtered by 100 points, and seemed destined for a bleak season.

However, one of the turning points of that fairytale year came in early June, when the Blues travelled to Geelong for a round eight encounter, and Percy Bentley changed his mind about making Wines into a key forward. Instead, he sent him to the centre, where Wines dominated from the first bounce, and helped Carlton to an impressive six goal win. From then on, Clinton Wines owned the middle of the ground virtually every time the Blues came out to play. His strong hands, balance and accurate disposal were his trademarks, and he was rarely knocked off the ball.

After that pivotal trip down the Geelong Road, Carlton lost only twice more all season, and kicked down the door to the finals with a 53-point thumping of Footscray in the last of the home and away matches. An impressive first Semi Final victory over North Melbourne, and a storming finish to run over the top of Collingwood in a ferocious Preliminary Final, paved the way for Carlton to meet South Melbourne for what was originally the 1945 ‘Victory’ Premiership. Instead, it has gone down in Australian sporting history as ‘The Bloodbath.’

Because the MCG was still in use as a transit centre for American troops, the 1945 finals were all held at Princes Park. In time of relief, hope and new-found optimism at the end of the war, an enormous crowd of 62, 986 packed into the ground on Grand Final day, and saw two teams absolutely ruthless in pursuit of victory.

Wines was matched against South’s veteran captain Herb Matthews and came out on top. He was flattened by a charging South ruckman at the first bounce, but recovered quickly enough to be involved in both of Carlton’s first-quarter goals. Then, as the match degenerated into a series of running brawls, Wines kept his composure and concentrated on winning the ball. While fists, elbows and boots flew around him, he provided a viable avenue to goal all day, and was rightly lauded for his part in perhaps the Blues’ most famous victory.

With several players – including captain Bob Chitty - missing from the early part of the season while they served lengthy suspensions handed out after the Grand Final, Carlton couldn’t build any momentum in 1946, and drifted down the ladder to sixth by season’s end. The disappointment around Princes Park was compounded by the retirement of Chitty after round 19, and the announcement by Wines that he was moving on.

His new wife was a Sydney girl who was deeply home-sick, and Wines had been made an attractive offer (including employment) by the dominant Australian Football club in Sydney; Eastern Suburbs. Carlton didn’t stand in his way, and Wines went on to be one of the biggest stars of Sydney football for more than a decade.

As captain-coach of Eastern Suburbs, he led the Bulldogs into the finals on a regular basis. He was the NSWAFL leading goal-kicker in 1948 (56 goals) and 1949 (81 goals) and was appointed captain of NSW for the 1949 ANFC Carnival. He ended the week with a total of four goals in matches against Queensland (twice) and Western Australia. In the last round of the 1950 Sydney season, he kicked a mammoth 19 goals for Easts against Illawarra in a match where Eastern Suburbs scored 34.35 to Illawarra’s 0.3.

A player who was genuinely appreciated in the aftermath of his short career with the Blues, Clinton Wines was granted life membership of the Carlton Football Club in 2003. He passed away on the 23rd of October 2006, at the age of 84.

Wines also wore guensey No.35 in 1944 whilst playing with Carlton's reserves team.