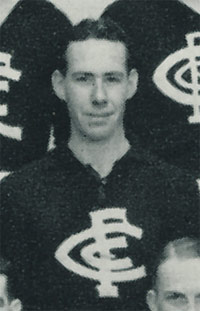 Dan Beauvais had a brief 4-game career at Princes Park in 1945 - one of the most tumultuous years in history. It was the year when World War II finally ended with the atomic bombing of two Japanese cities, and when the Carlton football club won a famous, controversial seventh VFL flag in the ‘Bloodbath’ Grand Final victory over South Melbourne.

One of ten young men to wear the Old Dark Navy Blue for the first time in 1945 was Dan Beauvais, a 24 year-old from Jeparit who did well when he came off the bench and kicked two goals in Carlton’s good win over Geelong at Kardinia Park in round 8.

Beauvais was rewarded with a place in one forward pocket the following week (alongside Lance Collins and Ron Hines) and put through another three majors during Carlton’s 9-point loss to Footscray at Princes Park. After this sixth loss of the year, the Blues were languishing in ninth place on the ladder, well out of finals contention.

However, a shock win over second -placed North Melbourne at Arden Street in round 10 revived the Blues spirit, especially when Collins returned to form at full-forward and kicked six terrific goals. Beauvais didn’t trouble the scorers that afternoon, but was still a little unlucky to lose his place in the side when the versatile Ken Baxter returned from injury the next week, and Carlton at home beat South Melbourne by six points.

Beauvais spent just that one week in the seconds before he was recalled as 19th man for round 12 against Melbourne. He sat on the pine throughout the game, even as Melbourne rattled home, kicking 4.1 to Carlton’s 2.1 in the last quarter at Punt Road. The Blues held on to win by 1 point, and moved to within 8 points of the top four.

Even so, Beauvais was apparently dissatisfied with his progress at Carlton, and soon afterward decided to switch clubs to Hawthorn. Carlton wanted him to stay, and the matter dragged on for some weeks until Dan was eventually released. Thereafter, while the Blues continued climbing the mountain toward the finals and eventually succeeded, Beauvais joined the Hawks, and played another seven matches before retiring in 1946.