Morrissey’s father, George Morrissey Senior, was a capable and controversial footballer who captained St Kilda during an interrupted career at the Junction Oval between 1907 and 1913. While leading the Saints in 1912, he was suspended for abusing a field umpire and threatening to take his team from the field – actions that saw him relieved of the captaincy at the end of the year.

In 1927, 19 year-old George Morrissey Junior followed his father into VFL football at North Melbourne after being recruited from Brunswick Juniors, but managed only four games before departing from Arden St the following year. He played at Port Melbourne and then Kew prior to being recruited by Carlton. In 1931 he bobbed up at Princes Park, and wore guernsey number 8 in nine senior matches for the Blues. He was 19th man on debut against Footscray at the Western Oval in round 6, and a real contributor in a back pocket in his final outing – the Blues’ devastating defeat by Geelong in the 1931 Preliminary Final. By then just 23, Morrissey had shown steady improvement during his one season with Carlton and it was something of a surprise when he decided to give the game away.

When World War II began in 1939, George joined the RAAF and served in various ground crew and administrative positions on the Australian mainland. He was discharged in December 1945, and passed away in August 1979 at the age of 71.

Morrissey was born in the small Victorian township of Timor, located north of Maryborough. 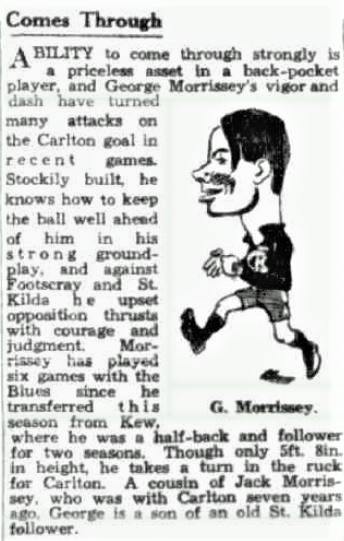