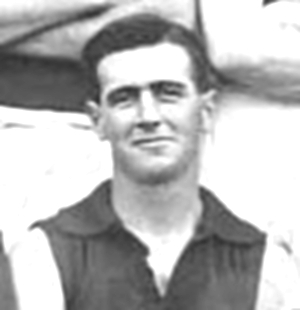 Notable for his part in a sensational incident after a match against Essendon in 1923, John (Jack) Morrissey played his first game for Carlton at full-forward. But after rarely touching the ball all day, he spent the rest of his interrupted seven-year career at Princes Park in defence.

Morrissey was recruited from Dunolly in central Victoria, and made his debut in the goal-square against South Melbourne at the Albert Park ground in round five, 1920. On that blustery, cold Saturday afternoon, both sides were wayward in front of goal. South had 18 scoring shots, and the Blues had 19 – yet still lost by three goals.

Morrissey was dropped for the next match, but eventually came back into the team on a half-back flank, where he was much more at home, and ended up playing ten games for the season. Carlton wound up the year third on the ladder, and made it all the way to the Preliminary Final, only to fall to Collingwood by 24 points. Morrissey was left out of both finals teams, and afterward told Carlton he wasn’t playing on.

He spent all of 1921 back at Dunolly, then reconsidered, and pulled on guernsey number 7 for the Blues in 1922. He was small-framed and lightly-built, but Morrissey’s all-round skills were good, and his decision-making excellent. He was a solid contributor for his team in that year’s Semi Final, battling the odds in a back pocket as Carlton lost once more; this time to Essendon by 5 points.

In round 13 of 1923, Essendon again inflicted pain on Carlton when they thrashed the Blues by 11 goals at Windy Hill. At a post-match function, mounting tensions within the team burst into the open when big forward Bert Boromeo openly criticised his captain-coach Horrie Clover, and Morrissey got involved in a heated argument with his team-mate George Bolt – an argument that ended up with punches being thrown by both men. It was an ignominious episode for Carlton – one that embarrassed the club deeply.

A committee meeting was called to discuss the matter, resulting in all three players being suspended indefinitely. Bolt and Boromeo never played for Carlton again. Morrissey however, served his penance and came back into our senior team in 1925, playing 26 games in guernsey number 13 before finishing up with a somewhat ironic 11-point victory over Essendon at Princes Park in round three of 1927.

The following week The Herald May 21 1927 (p3) said Jack Morrissey was out of the Round 4 match suffering from appendicitis.

After that, Jack Morrissey crossed to North Melbourne in 1928, where he managed another 29 games before hanging up his boots for good in 1930 after three seasons with the Shinboners.