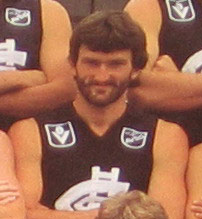 
Greg Sharp was a solid, wingman and key defender in the early 1980's.

Sharp was recruited from NSW side Western Suburbs in 1978, after he had played in their 1977 premiership and was runner-up for NSW Rookie of the Year in 1977. He was recommended to the Blues by former Carlton U/19's and Reserves player Ian Harry who was Sharp's coach whilst playing for Western Suburbs, ironically, both players would wear the No.29 guernsey at Carlton.

Sharp debuted in 1981, playing 9 games in our Premiership Year, but only managed 2 thereafter for the Blues. He also played in the losing 1981 Escort Cup Grand Final against Essendon, where Tim Watson's leap over Doull is stuck in footy folklore.