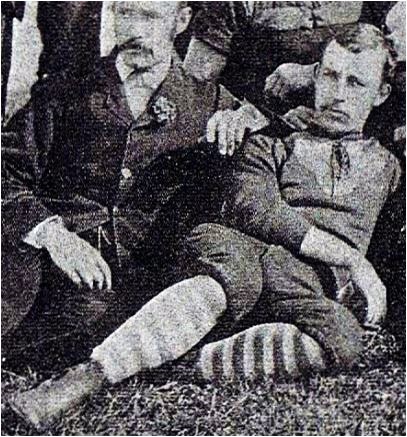 
Left; H Drew pictured in the Carlton team photo in Adelaide
Other player/official is R. Morgan


1884 Named in 13 Carlton teams for the year.
First mentioned in the team for the game against Hotham at the M.C.G., on June 14, his possible debut.

H. Drew was named as the competition's best wingman in 1884.
(The History of The Carlton Football Club, Brian Hansen,p60)

Included in the best in Victoria in 1884

H. Drew was named among the best in their position as a wing for the 1885 season.
(Centenary Souvenir of Carlton Football Club, p17)

In 1932 the Weekly Times May 28 (p57) on a feature on Maryborough (Vic) mentions that the first Maryborough Football Club in 1872 was captained by Billy Lacey. It said Lacey played at Carlton at the same time as James Drew.