A photo of Billy Lacey is required. If anyone can furnish Blueseum with an image, it would be greatly appreciated.

Recruited from Carlton Imperials, William Nicholas Lacey was widely acknowledged as one of the outstanding centremen of the decade 1865 to 1875, despite the fact that he retired at end of 1875 (a Carlton premiership year) to concentrate on his career as a school teacher. (The Carlton Story, H.Buggy and H.Bell, p31,33, 37)

"Born in Carlton, the late Mr. Lacey was educated at St. Patrick's College, Melbourne, where he had a brilliant career, afterwards matriculating at the Melbourne University. He then studied law, being an articled clerk in the same office as the late Sir Samuel Giltot. Although having only one other examination to pass in order to qualify for a barrister, the deceased forsook that idea, and joined the Education Department as a teacher." ( Maryborough Historical Society research)

1874 July 11
Carlton played Albert Park at Albert Park.
The Leader newspaper July 18 (p11) reporting on the match said ;
"Lacey in particular performed prodigies of skill and effective play, and the manner in which he dodged ball in hand through the very arms of his antagonists and then secured his kick was scientific football. The beauty of his play is that upon which ever side he is compelled to turn his kick is equally effective, either from the left or right leg. An unflagging worker, a good runner and dodger, and above all possessed with judgment and fine temper, he is at present perhaps the best player in Victoria."

1874 Lacey named in team to play St.Kilda at the St.Kilda ground on 12th. September. (The Argus)

1874 Billy Lacey named as one of the star players for the year "the finest centre player the colony has seen".

Lacey - may his shadow never be less - a mere colt of last year, has developed into the finest centre player the colony has developed, and Smith says, "take him for all in all we shall not quickly look upon his like again."
(Leader Oct 10 1874)

Lacey was presented with a locket on April 23, 1875, and "was as great as he was".
(Centenary Souvenir of Carlton Football Club p11)

1875 An all-round player of undoubted excellence, equalled in taking the ball into play from bounds, a good left foot kick, and follows the ball all through the play.
(The Footballer, 1875. p27)

1877 The Gippsland Times, July 23, reported that Sale played a combined Maffra and Stratford team the previous Saturday. "The latter, (the combine) though chiefly novices at football, showed very considerable pluck and energy throughout, under the able leadership of Mr. Lacey, a Carlton veteran, who evidently has not yet forgotten the game in which he for so long a time played with the leading team in the colony, and of which team he was one of the mainstays."

1879 Lacey captained Maryborough against Albert Park at the East Melbourne Cricket Ground on 19th July. The Argus reported that was the first time that Maryborough had ventured to the city.

1888 August 30: "By the way, some of you fellows will remember the tower of strength for Carlton in the olden days - Bill Lacey, a left-handed player. He is keeping the Palmerston Hotel, opposite Tommy Leydin's, and there are more unlikely things than that he will don the war paint next year for his old love." (Trove-Referee p8)
Former Carlton skipper Tom Leydin ran the Rose of Carlton Hotel, on the corner of Palmerston and Canning Streets, Carlton.

"I have a bit of football gossip for you. You may remember, or else must have heard of, one Bill Lacey, a celebrated wing player for Carlton many years ago. He keeps a pub, opposite Tommy Leydin, in Palmerston street Carlton; and he is so cast-down at the way the dark blues have fallen away that he seriously thinks about donning the war-paint on their behalf next season."
"And so shall I too!" remarked Dicky Frayne, when I told him about Lacey. "I only want a strong elastic knee stocking to make my Dutch peg as good and strong as ever it was."
Ah, would that it were so, Dick, old pal!"
(Melbourne Punch p10)

1930 April 12. The Argus published an article on the city of Maryborough. In part it said; "Later on, another school teacher, a great Carlton footballer of his day named "Billy" Lacey, made the district famous for football. He had the raw material at his command and he moulded it into shape. He was a contemporary of George Coulthard, Jack Gardiner, and George Robertson and "The Footballer" of the period commemorated his prowness in the following lines;

With teeth firm clenched, yet a smile withal,

Out of a scrimmage, without a cap-

A most reliable, sturdy chap-

And wherever he went there were cries of pain,


In every way the late "Billy" Lacey was a great athlete.

1924 March 29
A letter from former South Yarra player J. G. Burton now living in Ireland, to the editor of the Australasian (p33), in reply to an article by Jack Worrall on 40 Years of Football, says;
"Then there was the Carltonian Lacey, who always got the ball when thrown in from out of bounds."

1925 Billy Lacey passed away on 6 June, aged 71 years. He is buried at the Maryborough Cemetery. 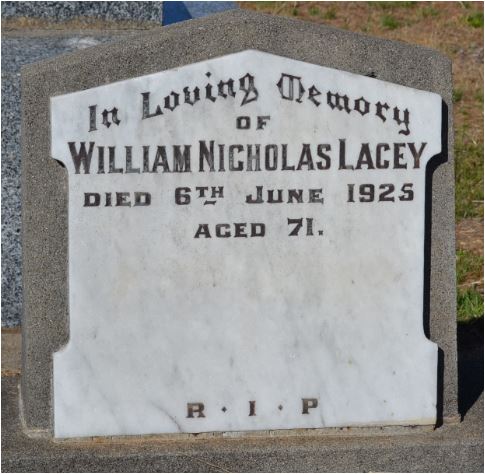 "William Nicholas Lacey, RIP - By the death of Mr. William Nicholas Lacey, which took place at his residence, Raglan-street, late this year at the age of 70 years, there passed away a man of high educational attainments and one in his young days excelled on the cricket and football fields. Born in Carlton, the late Mr. Lacey was educated at St. Patrick's College, where he had a brilliant career, afterwards matriculating at the Melbourne University. He then studied for law, being an articled clerk in the same office as the late Sir Samuel Gilot. Although only having one other examination to pass in order to qualify for a barrister, the deceased forsook that idea and joined the Education Department as a teacher. In the mid 'seventies Mr. Lacey was the captain and a champion player of the Carlton Club. "Will we ever see his like again?" ran the last line of some verses written when he ceased his connection with the club. In the scholastic world, Mr. Lacey's name will long be cherished with grateful remembrance by those who had the good fortune to come under his spell and tuition at the Maryborough Grammar School."
"A widow and grown-up family of two daughters and a son and two step sons are left to mourn the loss of one who for such a lengthy period was a prominent figure in the daily life of Maryborough. To them the Old School extends its sincerest sympathy and with it, prayers for the eternal repose of his soul. - R.I.P."
(jesuit.org.au The Patrician 1925 p 54-55)

Many thanks to the Maryborough Historical Society for much of the above information.

1999 - David Parkin & John Elliott at training during the finals.