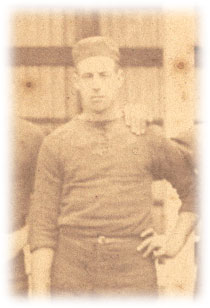 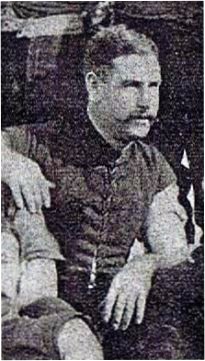 1876 Jas. Rickards was playing for Carlton Imperials.
The Footballer 1876 had this to say about him;
"Goal sneak, a splendid kick either foot, should be played back occasionally, second for the Challenge Cup with 60.5 yards."

1877 Wants the qualification of speed to make a really fine forward, otherwise, is not easily surpassed, his drop kicking is first class, second for the First Twenty drop kick with 64 yards. (58.52 Meters)
(The Footballer 1877. p35)

1878 Has not improved much in speed, but very handy when pressed, being a neat and expert dodger, and kick.
(The Footballer. 1878 p31)

Jas Rickards played in both the Carlton-Waratah (Rugby) and (Australian Football) exihibition matches played at the M.C.G. on June 29 and July 1 1878

1879 Jas. Rickards - Seems to improve every season, especially in speed; Has shown some sterling play, back and forward; is a long telling "Drop," and is much esteemed by his comrades.
(The Footballer 1879. p29)

1880 Every season adds more lustre to his fame. In running, kicking and determined forward play he is justly entitled to rank in class, A1.
Won the challenge drop kick trophy.
Fourth top scorer for Carlton with 11 goals in 1880.
(The Footballer. 1880. p23, 65)

1881 Was compelled for the nonce to take a back seat during the season, is far from being played out, and is hoped next season will see him forward as fresh and vigorous as ever.
( The Footballer, 1881. p23)

1882 Was the most successful competitor at the sports meeting held during this season.
(Centenary Souvenir of Carlton football Club p16)

Was a member of the Carlton touring side to Adelaide in 1881.
(The Carlton Story, H.Buggy and H.Bell, p50)

1883 The Argus Saturday 7th. April reports that at the Carlton Football Club general meeting last night, J. Rickards would be presented with an illuminated address. (see Dick Frayne )
(James or John Rickards?)
At this meeting James was announced the most successful competitor at the annual sports event held at the oval