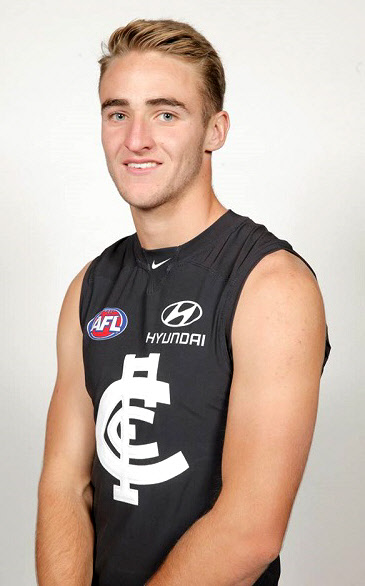 Originally from Essendon Districts Football League club Aberfeldie, ruckman-forward Jayden Foster was recruited from the Calder Cannons by Carlton with the Blues’ fourth and final selection in the 2014 National Draft. A strapping 194 cm key forward prospect whose father Peter had played six games for Fitzroy and 163 games for Footscray between 1980 and 1993, Jayden had been overlooked as a father-son selection by the Bulldogs, allowing Carlton to swoop.

Jayden was a strong-marking left-footer who always knew where the goals were. Although he had been sidelined for more than three months early in 2014 with stress fractures in his feet, he had returned to play in the TAC Cup with the Cannons and kicked 49 goals in 16 matches, averaging 10 possessions and four marks per game. Included in those totals were seven bags of four goals or more.

In the early months of the 2015 season Foster put in some eye-catching efforts in VFL matches with the Northern Blues, but in August he was diagnosed with a recurrence of his foot problems and Carlton’s medical staff ordered him to take a complete rest, pending further assessment.

He was back training by March 2016, and went on to play all 18 games for the Northern Blues that season - mostly as a key defender. However, a few days after the last round of AFL matches, Jayden was delisted without having earned promotion to Carlton’s senior team.

Foster would line up for VFL club Footscray for the 2017 season. When he wasn't playing at Footscray he would head back and play with his junior club Aberfeldie during the season. He would make the move back to Aberfeldie for the 2018 and 2019 seasons.

When Foster came to Carlton in November 2014, the Blues’ senior coach was Mick Malthouse – who by coincidence had coached Jayden’s father, Peter, at Footscray from 1983 to 1989.