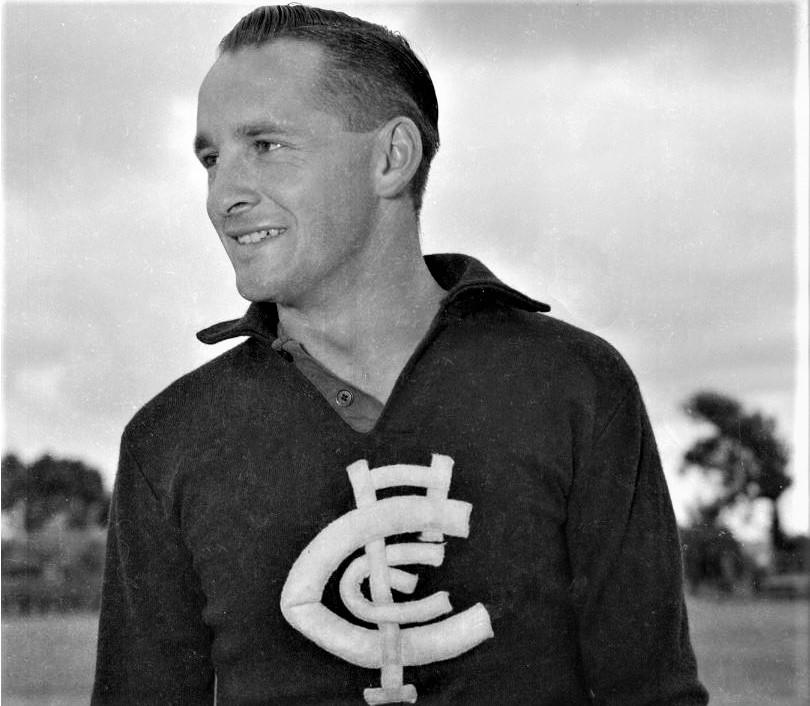 
James Dalis Davies was born in Cardiff, Wales. He travelled half the world to settle in Perth WA, and later crossed an entire continent to play 16 games over two seasons with Carlton. A rover-forward, his first and last senior games for the Blues were both narrow defeats by Footscray at the Western Oval.

Davies came under notice from Carlton at the height of World War II, when the Blues (like all VFL clubs) were finding it hard to field strong teams each week because of manpower shortages. Davies had impressed Carlton’s scouts during his 74 games at Swan Districts when he won the Sandover Medal for the best and fairest player in the WANFL in 1944. Soon after that, his football career was disrupted by twelve months of wartime service with the RAAF.

Carlton told Jim that the door was always open at Princes Park, so in 1949 he backed his ability and ventured east. He made his senior debut for the Blues off the bench against Footscray at the Western Oval in round 11, 1949, in a tight contest that eventually went to the Bulldogs by five points. He kicked his only career goal in another close scrap against Fitzroy in round 13 at Princes Park, and then had to make way for the proven ability of Jim Mooring, ‘Stumpy’ Turner and Fred Stafford when the finals rolled around. The year ended badly for the Blues, with a 73-point hiding from Essendon in the Grand Final.

After changing his guernsey number from 32 to 7 in 1950, Davies made another 12 senior appearances by July - more than half of which were as a reserve. When he was told that he would be sitting on the pine yet again for round 17 - when Carlton took on Footscray at the Western Oval - Jim obviously decided that enough was enough. It is unclear whether he got a run on that Saturday afternoon when the Bulldogs won by 13 points, but we do know that he left Princes Park soon afterward and went back to WA to play for Claremont. He would play for Claremont from 1951 to 1954 and play 57 games and kick 69 goals. After retiring from playing football, he became involved in the administration of the game, culminating in becoming chairman of the WANFL in 1975. He was also the Director-General of the WA education department. His son Craig Davies represented Australia in field hockey.

Jeanne and Richard at Raheen.